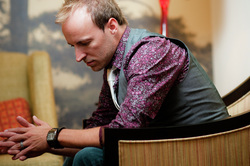 Jason Bare had long ago given up looking for it.  It was a song he had co-written with his cousin Amanda who was more like his sister, growing up in their close-knit family.  But Amanda had walked a different path than Jason, battling addictions much of her life.  Jason was encouraged, however, as Amanda finally seemed to be turning a corner and getting her life together.  Yet in 2009, it all went terribly wrong when Amanda, at age 27, died suddenly of a medically-induced drug overdose.  That same day, without looking for it, Jason found the song he had written with her and immediately, he knew why.

“I had searched for that song for years,” says Jason.  “And when I found it on the exact day she died, I knew it had to be  God.I told her parents I had found it, and they asked me to sing it for her funeral.   I wanted to put that song on the new CD so that Amanda’s life would be a beacon of hope for people.  It also became a catalyst for me to get serious about music and use my life to make a difference for other people.”

On his new CD, Beautiful Design, produced by Loren Barton (Felicia Barton, Coko) and Nathan Walters (former vocalist with Plus One), Jason melds his love of worship with what he describes as his “need to wail.”  After spending a lifetime growing up in church as a preacher’s kid, attending Lee University and traveling as part of the Lee Singers, honing his songwriter skills and releasing two national songs, and dedicating 14 years to leading congregations in corporate praise & worship, Jason is moving in a bolder direction with his music.

The title song of the CD reflects Jason’s new-found courage of conviction.  He explains, “I’ve struggled for many years with a low self-confidence and a fear that I was unable to accomplish what I believed was God’s calling on my life.  This song reflects the realization that I am God’s creation and His design never fails.  I hope it reminds listeners that they are fearfully and wonderfully made and encourages them to ask God to paint in them what He would have them to be.”

Indeed, encouragement abounds on Beautiful Design with tunes such as “Touch the Sky,” “You Found Me,” and “I Can’t Escape You,” all co-penned by Jason.  The two tunes co-written with Nathan Walters are polar opposites.  “Blame” is a haunting introspective song with lyrics such as “Lost my way and sense of direction / Faded away with the time I was wasting / I keep placing fault on someone else / I’m making excuses for myself / Drowning out the voice inside that says/You’ve got nobody else to blame.”  The second Walters/Bare song is the bonus Christmas tune “For the First Time” which went straight to #1 on the national worship radio charts.

Now leading worship at Kingdom Life Ministries in Virginia, Jason is a sought-after clinician for various worship conferences including the annual Throne Zone conferences.  Jason has a unique perspective on the role of worship in the lives of Christians.

“Worship should never be what we can get out of it, but what we can give,” he says.  “So many people erroneously think that they don’t know how to praise or don’t sing because they can’t sing on key or whatever.  The truth is, God designed human beings to worship.  And each of us has our own sound in worship, our own Tehillah.  And when we find our own unique Tehillah and let that rise up in us, we become a tapestry of praise that must be one big, beautiful sound in God’s ear.  That’s the goal I have in everything I do.  To find that place of true worship in my own life and offer it fully and freely to God.”

Purposefully centered in the middle of Beautiful Design is the song that was lost and then found on that fateful day a year ago. “Story of Grace” continues to be Jason’s siren cry to people who feel they have gone too far or done too many things wrong to find God again.

“Years of battling addiction left scars on Amanda’s life,” Jason recalls. “But through that song, she wanted to share her wounds so that someone else might find God’s redeeming grace.  That’s Amanda’s legacy in my life, and I feel a sense of urgency to tell anyone that will listen that God’s love and forgiveness is readily available in their lives regardless of what they’ve done.  The reality is, we are all living the story of grace.”