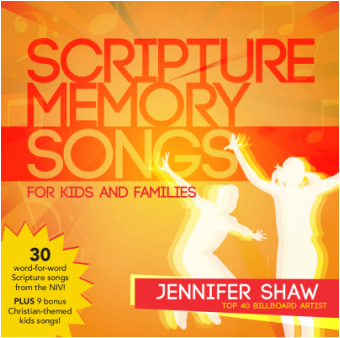 According to a LifeWay Research study, only 45 percent of those who regularly attend church read the Bible more than once a week, and 18 percent of attenders say they never read the Bible. A Barna research study showed that 60% of Americans cannot name five of the ten commandments. Similar surveys have shown that scripture illiteracy is at an all-time high, and Telly Award winner and top 40 Billboard artist, Jennifer Shaw, hopes her new project will help alter the current trend. Shaw is releasing a children’s music project entitled Scripture Memory Songs for Kids and Families, which features 30 word-for-word scripture songs from the New International Version (NIV) of the Bible.  The NIV version is the second most popular version according to American Bible Society, surpassed only by the King James. The recording project also includes nine bonus Christian theme songs suitable for Vacation Bible School curriculums or for other kids-themed events.  Shaw says the project has been eight years in the making.

“My church was looking for some scripture memory songs that were for older kids,” says Shaw.  “Specifically, we wanted word-for-word scripture songs that included the references and were from the NIV.  We could not find many options, and the ones we did find were for very young children and didn't appeal to our age group. We wanted them to be fun and upbeat and cool - something the whole family could listen to in the car.  So I decided to begin writing music to fit some scriptures that I wanted my own kids to learn and each year, I would write more songs to go along with our Vacation Bible School events. It just grew from there.”

Scripture Memory Songs for Kids and Families is targeted to kids from kindergarten age up to sixth grade, though Shaw admits she hopes that adults will listen with their children.

“It is definitely challenging to write music for scriptures as there is typically no meter or rhyme,” says Shaw, “but it is a great way for kids – and adults – to memorize verses. This generation of kids needs the Word of God embedded in their hearts and minds maybe more than any generation before them. I hope this project will be a fun way for kids to fall in love with the Bible.” 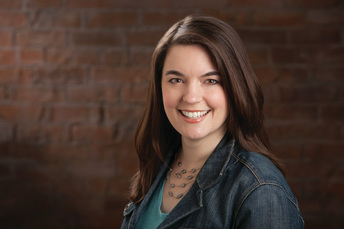 Shaw has garnered several accolades within the Christian music industry over the past few years, including a #3 song on the national Inspirational radio charts.  The music video for her self-penned song, “Your Child,” won a Telly Award and debuted on Focus on the Family’s “I Am Pro-Life” Facebook page to over 500,000 followers.  The song has been used by Joni and Friends, a worldwide organization which serves people with disabilities, founded by popular author and speaker Joni Eareckson Tada.

Shaw’s book Life Not Typical: How Special Needs Parenting Changed my Faith and my Song, was chosen for the Resource Library of Autism Speaks, the world’s leading autism science and advocacy organization. The book chronicles Shaw's journey when her son, Toby, was diagnosed with Sensory Processing Disorder (SPD) at an early age. SPD is closely aligned with autism in that every autistic child has some form of SPD. One study estimated that 1 in 20 children in the U.S. are affected by the disorder.

Shaw’s song “God Loved the World,” which she co-wrote with Lifeway’s Songwriter of the Year, Paul Marino, was the theme song for the annual Evangelical Covenant Church conference and was featured in a  Lifeway Christmas musical. The song was also made into an Easter choral anthem and became a #1 best-seller for Lifeway Christian Resources.

With degrees in both piano and vocal performance, Shaw completed her graduate work in opera performance at the prestigious Manhattan School of Music.  A former professor at Cedarville University, Shaw now travels full-time as a singer and speaker. For more information on Jennifer Shaw, visit www.JenniferShaw.com.

Click this link to view a full bio on Jennifer Shaw.