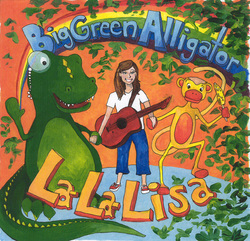 Who would ever guess that a silly song made up on a long road trip over fifteen years ago would become the theme of a children’s CD in 2010?  Certainly not acoustic folk/pop artist LisaWeyerhaeuser (pronounced “Warehouser”). But Lisa’s family and friends knew it would happen one day.  Because if anyone could be considered over-qualified to write a children’s CD, it is Lisa.  She even had the cool nickname already in place.

“I started singing at youth camps when I was 16,” says Lisa.  “And to this day, I have 30-somethings come up to me in the grocery store and ask, ‘Aren’t you La-La Lisa?’  That name has stuck even after all these years.”

But it takes more than a nifty nickname to know what kids like.  And Lisa’s accomplishments as a songwriter, worship leader, licensed counselor, Professor of Adolescent Psychology with Master Degrees in both Religion and Counseling Psychology, and a pastor’s wife, have given her ample knowledge and experience to create a kids music project.  But probably the defining experience that gave Lisa the most confidence to take the plunge into children’s music was being the mother of three growing boys, now aged 6 to 15.

“I was tuned into a kid’s music station on XM radio in the car with the boys one day,” Lisa recalls, “and the music was sointeresting and engaging.  Even after I dropped the kids off at school, I found myself listening to that station.  I really started thinking about writing some children’s songs at that point. I wanted to make them fun, but I also wanted to make sure they were meaningful.”

After mentioning the idea to a producer friend who just “happened” to be looking for a children’s project, Lisa felt the time was right and Big Green Alligator was born.  Targeting kids from pre-school through kindergarten, all 18 songs on the new CD were written by Lisa, although she proudly boasts her oldest son was the originator of the tune “My Little Brother.”

“Jonathan wrote a poem in fifth grade about his little brother, Joshua.  It was so sweet and just talked about things he observed his brother doing, including growing up. When he read it in the classroom, all the mothers were in tears.  I knew that poem was the basis for a good song.”

Songs on the CD range from really fun (“Silly Bob,” “The Countdown Song”) to good lessons (“Be Careful What You Say,”  “Don’t You Worry”) to spiritual truths (“God Has Made Us,” “That’s a Fact”), but it’s the CD’s theme song that ties everything together.

Ironically, the imagery of the title song –“A big green alligator fell upon my windshield”– originated on that road trip long before her journey to motherhood began.  But as Lisa began to breathe permanent life into the Big Green Alligator, she decided he could play a vital role in the lives of today's generation.

“I put a lot of questions into the lyrics of Big Green Alligator  – ‘Where did we come from, where are we going, and how did you find your way to me?’ – because I wanted kids to feel like they could ask this character anything. I believe it is essential for kids to learn to express their feelings at early ages.  I want them to know that if they are shy, it’s ok.  If they feel sad about something, it’s ok. There is a freedom in learning to correctly express emotions.  If kids can learn how to do that when they are young, it will be more natural for them to do as they get older.”

Plans are in the works for the Big Green Alligator and Silly Bob to come to life – in costume-form – and join Lisa in her concerts.   And there will be an interactive website and Facebook page for kids to ask the Big Green Alligator anything they like and receive responses that can be trusted by parents.  The CD is not only an act of love for kids, but Lisa has dedicated a portion of the sales to Teen Mother Choices International, a unique program that utilizes volunteers from local area churches to help provide teen mothers with a support system.  The charity offers services such as childcare so the young mothers can return to school, caring mentors who provide emotional support, and Life Skills Workshops which equip teenage mothers with resources and information to help them become independent functioning members of society. Lisa has served on the board of the organization and has witnessed first-hand the impact the program has had on teen mothers.  All the girls stay off welfare and to date, 100% of the girls that have gone through the program have graduated from school and found jobs to support themselves.

While Lisa has ambitious goals for Big Green Alligator, ultimately she has a very straightforward message to convey.  “I want this CD to reflect the simple faith that children naturally exhibit,” says Lisa.  “Jesus invitedus all to come to Him ‘as a little child’ because a child trusts God wholeheartedly, without doubt.  I hope these songs offer kids the freedom to express themselves and do what they do naturally – believe.” 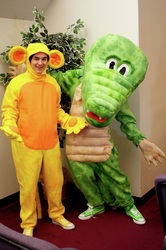 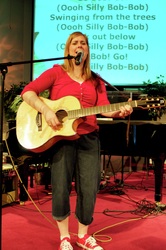 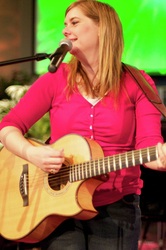