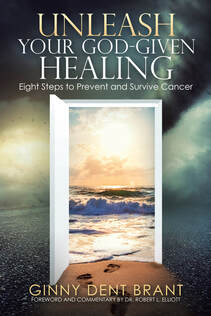 For Immediate Release (Greenville, SC) — The book “Unleash Your God-given Healing: Eight Steps to Prevent and Survive Cancer” by Ginny Dent Brant has won the 2020 Golden Scroll Award as Best Memoir from the Advanced Writers and Speakers Association (AWSA). The annual awards are given to active members of the association, now numbering over 500. Brant says she was surprised by the honor.

“There are so many incredible people that are part of the AWSA — speakers and authors like Lysa TerKeurst, Patsy Clairmont, and Carol Kent just to name a few,” says Brant. “I really didn’t believe I had a chance of getting second or third place, let alone first. I am very humbled by this recognition from my peers.”

Brant says this book was one she never wanted to write. Four months after her mother died of cancer, Brant was told by doctors she also had breast cancer, and an aggressive form of it. Having just watched her mother’s plight, Brant decided to take a different approach and immersed herself in research to find out what she could do in addition to traditional treatments to help her doctors beat her cancer.

In “Unleash Your God-given Healing,” Brant discusses how nutrition, lifestyle, integrative and conventional medicine, as well as biblical wisdom work together to boost the human body’s immune system. As October’s National Breast Cancer Awareness approaches, Brant says most people are unaware just how susceptible they are to the disease, with one in eight women developing it.

“Eighty percent of women and ninety percent of men are being diagnosed with estrogen-driven breast cancers so we must seek ways to lower our estrogen load,” says Brant. “People simply don’t understand the endocrine disrupting hormones (EDC's) that are in plastic bottles, cans lined with estrogen, some dairy and meat products, personal care products and cleaning products. Increasing our intake of clean fruits and vegetables, especially cruciferous vegetables and ground flax seeds, as well as daily exercise and managing stress are also important steps to take in preventing breast cancer.”

Brant believes COVID-19 is a “wake-up call” for people to get their bodies into optimum shape to fight illnesses of all kinds. Brant says parents concerned about sending their children back to school can use the steps in the book to help build up their immune systems and lessen their susceptibility.

“Doctors agree that some of the ailments we struggle with are either caused or made worse by our own lifestyle choices and lack of common sense,” says Brant. “Since rebuilding my immune system during and after my cancer journey, I have avoided the usual yearly colds, flu or viruses. Although I’m limiting going out in public and I’m practicing the CDC guidelines, I know that if I do get exposed to COVID-19, my immune function is strong and my own body will take care of it in general.”
​
Brant says her battle with cancer has strengthened another necessary element of healing—her faith.
“I thank God for each day. I’m grateful for how He has created the body to heal and repair itself. It’s all a part of his miraculous design, but we must do our part. We must care for our body as the Bible instructs us. We can either enhance the wonderful immune system God has blessed us with by our lifestyle or we can suppress it. My journey has given me a new purpose in life—to educate and inform other people, help others to prevent cancer, and help those who are currently battling cancer. It is not something I would have chosen, but God is opening the doors and I’m excited about this new direction. Although those with my diagnosis and who go through the treatments as I did are not promised tomorrow, my new philosophy is ‘Every day is a gift.’ I plan to serve Him faithfully until He takes me home.” 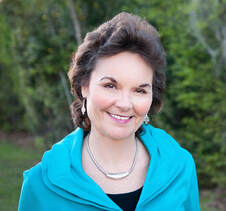 About Ginny Dent Brent:
Ginny Dent Brant is a speaker and writer who grew up in the halls of power of Washington D.C. She has served as a counselor, educator, wellness advocate, and adjunct professor. She served as a trustee of the Baptist International Mission Board for eight years, and she and her husband participated in mission work in Yemen, Gaza, the Czech Republic, Russia, China, and Romania. Brant is the daughter of Harry Dent, a successful political strategist who was wrongly implicated in the Watergate scandal and later converted to Christ. His story is the subject of Brant’s award-winning book, “ Finding True Freedom: From the White House to the World,” which was endorsed by the late Chuck Colson. To view Brant’s cancer prevention blog and more information visit https://www.ginnybrant.com/.
###