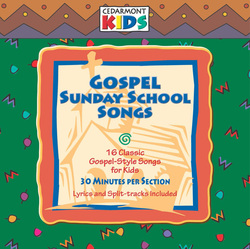 Cedarmont Kids® has announced the release of the 46th album in their multi-million-selling series.   The new CD, Gospel Sunday School Songs, features 15 Gospel classics and spirituals, including Free At Last, a song made famous in the iconic Martin Luther King, Jr. speech in 1963.  According to the label, this project marks the first time Free At Last has been featured on any children’s recording project.  Since its founding nearly 20 years ago, Cedarmont Kids has sold over 21 million albums and garnered numerous Platinum and Gold certifications for both its audio and video titles.  Mike and Sue Gay, owners of the Cedarmont label, say this new project was of special significance.

“We spent several years researching songs for this new release, looking for special ‘jewels’ from the African-American church.” says Sue. “We fell in love with songs like My Soul Is a Witness For My Lord, Guide My Feet, and The Welcome Table. Then one day we came across Free At Last and were so moved. Immediately we knew that it needed to be on the CD, so that kids could learn this wonderful song.”

Gospel Sunday School Songs was recorded in Cedarmont’s state-of-the-art studio, using some of the most sought-after musicians in Nashville. “I think this is the best CD we’ve ever done,” says Mike. “The players were fantastic, and Sue directed the kids in the choir to sing with authenticity and energy. To top it off, we were blessed to work with some talented young soloists like MaKenzie McGuire and Quintavious Johnson." Johnson, age 10, is a frequent soloist in his hometown of Franklin, Tennessee and recently won first place in the 4th Annual Demi Lobo national talent contest held in Chicago.  Johnson won first place in the Most Talented Under 12 competition, beating out 25 other finalists from nine states. "He blew us away with his talent and spirit,” Mike adds.

Cedarmont has built a broad customer base by focusing on well-known classic songs and selling their products at affordable prices. Their diversified catalog now features 46 CDs on five labels: Cedamont Kids® Classics, Cedarmont Kids Gospel®, Cedarmont Niños®, Cedarmont Baby®, and Cedarmont Worship for Kids®. Fifteen of these titles were Spanish releases. They have also developed a series of eleven DVDs, which are live-action, sing-along versions of the audio recordings.

During the production of Gospel Sunday School Songs, Mike shared a story his grandfather told him about growing up in rural southern Georgia where the family traveled to church on a horse-drawn wagon. During bad weather, they would often worship at an African-American church that was much closer to their home. They were always made to feel welcome, even during the tense years of segregation.

“It was not uncommon back then,” explains Mike, “for white families to visit African-American churches, even though it was, otherwise, a segregated society. As a result of their fellowship, many wonderful spirituals were transplanted and became known in churches of all denominations. We hope this new CD will enable people to share these special songs with today’s children so that there will be a continued spirit of sharing and fellowship among Christians around the world.”