Q&A with Trey Kent and Kie Bowman
Authors of “City of Prayer: Transform your Community through Praying Churches” 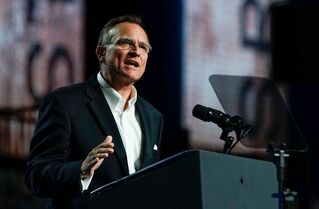 Q:  What motivated you to write this book?

A: Trey: We’ve seen such a powerful, reproducible, and unifying work through the Unceasing Prayer Movement in greater Austin. After Kie Bowman and I shared with national prayer leaders the Unceasing Prayer strategy, Ronnie Floyd, at that time the President of the National Day of Prayer, urged us to write down the Austin story of 24/7 prayer.

Q: After a recent tragedy, some skeptics said that people just offering "thoughts and prayers" means nothing. How does a city prayer movement respond to that?

A: Trey: I have the unique perspective to live in the same city for 26 years.  During the last eleven of these years, our city was covered in 24/7 prayer by area local churches.  The difference is truly remarkable in unity, partnership in the gospel, unity in serving our city, miracles, etc.  Some of the most remarkable responses to human need, compassion ministry, and evangelism in our city’s history has occurred during the last decade under the canopy of united, 24/7 prayer.

Kie: I can understand the frustration people feel if they believe the phrase “thoughts and prayers” is used as an innocuous reply to tragedy. I often see those kinds of things expressed on social media and I can’t help but wonder if everyone using those expressions really believes in the power of prayer. Obviously, millions of people in America do believe in the power of prayer, and for them prayer is a genuine response to every kind of heartbreak and tragedy. Those of us who believe prayer works miracles cannot be dissuaded by those who do not believe, but neither should we defend meaningless statements when we know the real power of true prayer.

Q:  What things have you seen happen as a result of corporate prayer?

A: Trey: Unprecedented unity and partnership, the miracle of the lake filling up, racial walls beginning to crumble, and the list goes on.

Q: How has the prayer movement in Austin impacted the racial divide?

A: Trey: When the Charleston shooting occurred, the Unceasing Prayer Movement responded very quickly and rallied hundreds of believers citywide at a unified prayer meeting at Metropolitan AME Church in downtown Austin one week to the hour of the shooting.

Kie: It was a powerful display of love and support with hundreds of people from all races represented. Racism is real, but when believers of different races worship and pray together the Body of Christ is fulfilling our Lord’s prayer for our unity.

Q: Why do you believe prayer has not been a focus for many Christians or churches?

A: Kie: I know Christians and churches believe in and practice prayer, but it’s also true that many of us have depended upon our own human strength for too long. As a result, prayer is often relegated to a few sentences before and after a meeting or a church service. So it’s a combination of lack of knowledge about how to pray and a lack of trust in God’s promises regarding prayer that leads churches to be negligent in prayer. That’s not the New Testament pattern, and we demonstrate the difference clearly in the book.

Trey: After completing a round-table discussion in Austin with national prayer leaders and pastors from around the country, several things became crystal clear. First, the prayer movement in America had somehow ignored the local church pastors. Secondly, for there to be a sustainable prayer movement that sweeps our nation, pastors must lead it by mobilizing their churches to pray. And third, for pastors to mobilize their churches to pray, we must give them a simple, reproducible strategy, and lots of tried and true resources.  This is what we’ve done in City of Prayer.

Q: Most cities do not have a good track record of churches working together. How does getting churches to pray together impact a community?

A: Trey: Most cities have not challenged and equipped local church pastors to lead their church to pray for the city.  It takes time, patience, and lots of perseverance—but in time I truly believe every city can be a city of prayer.  The key is local church pastors mobilizing their churches to pray. Praying together is a visible sign of the John 17 unity for which Jesus prayed.  Monthly prayer for the city moves the church’s focus outward to a bigger view of what God is doing beyond the church walls.  Pastors and churches must understand that the work that God does in and through local congregations should ultimately translate to their cities.

Q:  What do you hope readers gain from reading this book?

A: Kie: We know from Scripture and history that prayer movements precede revivals. City of Prayer offers pastors and leaders a blueprint to assist them in leading city prayer movements wherever they serve.

Trey: I hope each city will have a team of pastors to launch 24/7 prayer by getting 31 churches to adopt a day of prayer every month. We hope that church members will be inspired by the powerful movement of prayer that preceded us, and the tidal wave of prayer that is growing worldwide right now.  Ultimately, we hope to see a movement of prayer in every city in America that results in a nationwide revival.

A full-time minister since 1986, Pastor Trey Kent planted Northwest Fellowship in Austin, Texas in 1993. He has a Master’s of Divinity from Oral Roberts University and did Doctor of Ministry work at Fuller Seminary. He also authored the book, “Revival Cry: Contending for Transformation in this Generation.”

​Since 1997, Dr. Kie Bowman has served as Senior Pastor of Hyde Park Baptist Church in Austin, Texas. He holds a Doctorate of Ministry from Southwestern Baptist Theological Seminary where he also serves as a trustee. He is the president of the Southern Baptists of Texas Convention, and has authored five books and contributed to over a dozen others. He is an international speaker, recently preaching keynote sermons at the Southern Baptist Convention and at the National Day of Prayer Leadership Summit.