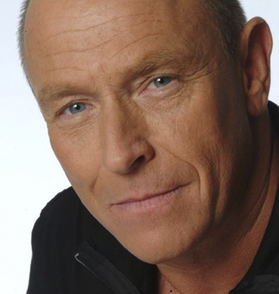 Q: How do you relate to the main character in the novel, Rust?

A: To say that I related to the main character in the novel is really shortchanging what has happened.  James Moore is, without doubt, very much me.  He is the braver part of me willing to fall to his knees and cry out for help.  He is the part of me that is unwilling to give up on his faith and God.  Thank God for James Moore.

Q: Tell us about Home Theater Films and any upcoming projects.

A: Home Theater Films has really grown out of the making of the movie, Rust, and a handful of faith- based films.  The notion behind the company is that we want to make affordable movies for the entire family that can be watched in the comfort of the home with the hopes that the stories of our films will inspire family conversation about uplifting and life-affirming topics.  We have several projects in the pipeline including two family action adventure movies as well as the upcoming Romantic Comedy called “Jesse and Naomi.”  (Though that title might change.)

A: I’m often asked about “my favorite role” that I’ve played and in all fairness to those characters, that’s about as difficult as saying you like one of your children better than the other.  My characters are my children – they are, to some degree, the offspring of the deeper parts of my soul, sometimes funny and sometimes tragic.  All that said, I still have to say playing Arnie Becker in LA LAW was pivotal to my life.  That role really was the golden ticket to a long and prosperous career.  It also became a blueprint for the characters I would connect with – the guy who seems to “have it all” but really is vacant, a great void unseen by others.  That’s easy to see in James Moore in Rust, just as it was with Arnie Becker.

Q: Why do you feel passionate about offering more faith-based entertainment options to the public?

A: I think creating and producing faith-based movies right now is important for two very clear reasons. First, they can be reaffirming to those like me who might be questioning their faith or straying from it because of a world that makes no sense.  Second, and this is really why I make the films and write the books, is to bring those who want nothing to do with “religion” into the circle, to at least take a look, kick the tires, see what the “fuss” is all about.  I think so many people, especially kids, are just turned off to faith because of what they perceive as the bad business of “religion.”  I have nothing against the word “religion,” but I try to use the terms Faith, Love, God and Christ more often.


Q:  If you could have dinner with one person, living or dead, who would it be and why?

A: I used to have a very long list of incredible people that I’d like to have dinner with, powerful people both dead and alive who have shaped our world.  Clearly, dinner with Jesus - not a bad book or movie title - but dinner with Him would be, well, everything, endless.  And that’s right up there still.  But honestly, to have one more dinner with my mother, to talk to her about her passing alone and its impact on me, if nothing else, would be… well let’s just say I’d give up quite a bit for that.  One more conversation.  I’d even pick up the tab!

Q:  If you could play any person in a movie, who would you want to play?

A: There are so many roles and characters I’d like to create and play.  I do have a story that I’m still waiting for my creative juices to greenlight, but it’s about a guy who went off to Vietnam as a 19 year old, a kids with so much potential and hope who was captured in the last days of the war and has been held prisoner ever since by what is now a single captor; an old man who has become something of a “life mentor.”  The old man dies and the kid, now sixty, literally runs out of the jungle back into the arms of America today!  Suffice to say, he’s unable to grasp what his country has become, from technology to politics to faith, none of it has the same face as when he left.  Now a “hero,” he’s thrown into the spotlight and the sudden fame seduces him, and not too long after he finds himself succumbing to all the trappings.  Next novel: “In the Running!”

Q: When you sit down to write a screenplay or book, how do your stories evolve?  Do you have a pilot/story in mind first or does the message behind the story prompt you to develop the story?

A: I never really sit down “to begin the writing process.”  To be absolutely truthful, ideas just come to me, not from any specific stimulus like a news event or something I witness first-hand.  And they usually arrive right when I’m in the middle of something, for no apparent reason!  I like to think of it like this… I give over to the world that is beyond my comprehension, a place outside of me, and at the same time within me that is without boundaries, infinite… in God’s embrace.  God gives me the stories when he feels the time is right.  Some call it inspiration, I simply call these sudden, unannounced sparks of creativity, “a gift,” which is not to be confused with calling myself “gifted,” as in “aren’t I great,” but rather “gifted,” meaning one who is bestowed these magnificent “gifts” from God.  The truth is, we are all “gifted,” but you have to have your heart and mind open to receive.

Q: Do you have any special techniques for getting into character when acting?

A: Actors approach acting from a variety of ways, some inside out, others putting on the clothes first, finding the walk, the talk, and then working their way in.  For me, it’s finding that truth that the character can’t quite see and when he does, runs from it.  I take all his written words and actions and suppose them to simply be smoke and mirrors, an M.O. for getting through the day.  But what is he masking, what is he hiding, what is he running from? What does he know about himself, but only gives a moment’s thought about it from time to time?  In the end, I try to understand his fear, what keeps him awake at night, and what that nice suit he puts on in the morning is trying to hide.

A: I’m very blessed to have had an acting career that has morphed into a writing and directing career… that more often than not, also has me acting!  What many don’t know is that I got my Master’s degree in Playwriting at UCLA when the Master’s Program in acting wouldn’t have me!  Good thing too because I fell in love with writing.  The blank page, God’s whisper in my ear, and turning that empty space into something stirring and entertaining – nothing like it!  But really, the trifecta of all three, at once, writing, directing and acting, has given me the greatest satisfaction.  I believe I’m a better actor when I direct and write the material.  I’m not sure why, perhaps it’s because I’m so intimate with the genesis of the material.  On another level, I often think that because I have so many hats to wear, I don’t have much time to give to the acting, and therefore I don’t “think” too much about it in performance which allows for a much more truthful character to unfold.  Thinking too much is a character killer. 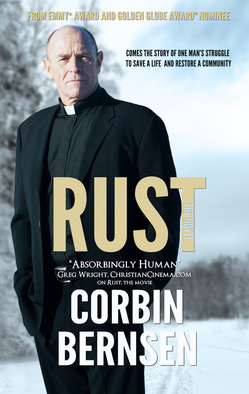 For Immediate Release (AZTEC, N.M.)—Pelican Book Group has announced the signing of Emmy® Award and Golden Globe Award® nominee, Corbin Bernsen to a publishing agreement. The publisher will bring Rust: The Novel, to readers this October 15. The book is an adaptation of Bernsen’s 2010 feature film Rust in which Bernsen played the main character as well as served as writer and director.

“I really found my voice in that film,” Bernsen says. “I was really looking for a greater meaning, a greater purpose, in life…to be able to expand on that in a novel just became an opportunity I couldn’t pass up.”

Ever Since Georges Méliés adapted Jules Verne’s From the Earth to the Moon in 1902, books have regularly been adapted into movies. The reverse—movies into books—is a less common occurrence, but “makes sense when the characters and plot can be fleshed out to create a compelling novel,” according to Editor-in-Chief for Pelican, Nicola Martinez.

“The book holds such a relatable message about faith and family. We are thrilled to publish Rust,” says Martinez.

Rust: The Novel is the plight of one pastor’s crisis of faith and the struggle to save his friend’s life and restore hope to a floundering community. Readers will be getting a “better, fuller, richer story in the novel,” says Bernsen. “I was able to expand more intelligently, more interestingly, on some of the original themes and concepts in the film.”

Fans will be able to enjoy Rust: The Novel in both softcover and e-book formats. Pre-order discounts as well as book clubs, retailers’ and librarians’ specials are available. For more information about the forthcoming novel and Bernsen, visit http://pelicanbookgroup.com/rustnovel.

About Corbin Bernsen:
Corbin Bernsen most recently starred as Henry Spencer on USA Network’s hit original series Psych. First catapulted to stardom during the 1980s by the hit NBC TV series, L.A. Law, he was nominated twice for both an Emmy® Award and a Golden Globe Award®.  Along the way, he hosted Saturday Night Live, and guest starred on Seinfeld and Star Trek to name a few notable television appearances. In the feature film arena, he starred in the comedy Hello Again, followed by other critically-acclaimed roles in Disorganized Crime, Wolfgang Peterson’s Shattered, The Great White Hype, and as the Cleveland Indians’ third baseman-turned-owner Roger Dorn in the extremely popular Major League series of films. With the film Rust, Bernsen shifted his focus to family-friendly movies and formed Home Theater Films. Bernsen’s latest film project, Christian Mingle, was released in January 2015 by Capitol. Bernsen lives in Los Angeles with his wife of 26 years, actress Amanda Pays, and their four sons.

About Pelican Book Group:
Pelican Book Group is a producer of Christ-centered fiction and is the first publisher to dedicate an entire new-adult romance imprint to promoting sexual purity. Headquartered in the Four Corners area of the United States, Pelican Book Group serves a global audience under its White Rose Publishing, Harbourlight, Watershed, and Pure Amore imprints. Founded in 2009, Pelican Book Group publishes numerous critically-acclaimed titles by award-winning authors from around the globe. Pelican Book Group was among the first to provide subscription-based e-books to the Christian marketplace.