“Smith argues that, contrary to evolution’s gradualism, the origin of sex must have happened in a single, point-in-time generation in order to move on to the second and succeeding generations.  In a manner never presented quite as pointedly, Smith’s challenge prevents evolutionists from resorting to vast amounts of time as the magic wand making all things possible.  When it comes to explaining the necessarily-sudden appearance of sex, millions of years are not the usual panacea for evolution, but instead a fatal flaw.” --Phillip Johnson, Author of Darwin On Trial, Professor of Law Emeritus, University of California, Berkeley, California
​ 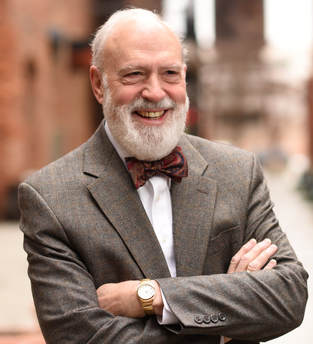 Q: What motivated you to write this book?

A: As a believer, I’m naturally concerned about the moral and spiritual implications of any explanation for the existence of life that does not need God or heed God.  The theory of microbe-to-man evolution is inherently godless, providing no foundation for either morality, social justice, or an afterlife for the soul.  But it was not those concerns that ultimately prompted the writing of this particular book.  Rather, it was what I sensed to be a fundamental problem with evolution science that led me into deeply researching its fatal flaw—namely, evolution’s inability to explain the origin of sex.

Q: Why do you believe so many Christians have bought into Darwinism?

A: Quite simply, it’s because the romanticized Evolution Story is the accepted scientific explanation of our day, constantly reinforced in education, PBS documentaries, and even coloring books for kids.  On Christian university campuses, Christian scholars seeking credibility within academic circles have embraced evolution theory, regardless of their personal faith.  Not wanting to be out-of-step with mainstream thinking, even religious leaders have “baptized” a godless theory, often rationalizing that incongruous syncretism as a wishful means of keeping young people from abandoning faith altogether.

Q: This book makes the case that sexual reproduction is the Achilles’ heel of Darwin's theory. How did you discover this and how much research did you do on the subject?

A: I’m not sure when I first considered the difficulty of “the missing sex link” in evolutionary theory, but it goes back decades.  The conundrum of evolutionary sex lay fallow while I put my pen to other significant issues until, one day, years of quiet fermentation suddenly turned into a serious quest.  Over the past four years of arduous study, reading every book and article I could get my hands on, I completed a manuscript which I then submitted to a number of scientific specialists for close scrutiny and fact-checking.  Their feedback confirms that evolution’s sex problem is both real and fatal to Darwin’s Grand Theory.

Q: Why do you believe Darwinism should be challenged after all these years?

A: Evolution’s challenge to morality and spiritual truth has never gone away.  If anything, its negative impact on cultural values is far greater than ever before, as best evidenced by the large number of young people abandoning faith for faithless secularism, or even militant atheism.  More directly, the challenges to evolution up to this point have either been based largely on Scripture (which evolutionists obviously reject) or premised on the Intelligent Design argument (which has been dismissed outright by evolutionists).  With the appearance of a fresh, powerful argument based solely on science and logic, there is finally a real possibility of making some significant headway. 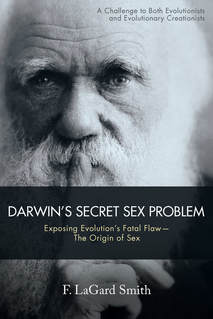 Q: Obviously, it took an entire book filled with research to make your argument, but if you were sitting at dinner with an evolutionist, what would be your best three-point argument over dessert?

A: First, Darwin’s theory of natural selection could not have “selected” from genderless asexual replication the DNA information necessary for evolving the very first male and female forms necessary for sexual reproduction. Second, natural selection could not possibly have evolved even the most primitive form of sex by meiosis—a radically-different form of reproduction from “exact-copy” mitosis, requiring a precise 50% reduction of (compatible) chromosomes, a mind-boggling process of “crossing over,” and a breath-taking recombination whereby the offspring is a genetically-different organism from any other that’s ever existed. Third, natural selection could not possibly have provided simultaneous, on-time delivery of the first sexually-compatible pair of any species in order to move to the second generation of that sexually-unique species, nor certainly to any other “higher” species along the supposed chain of common descent from microbe to man.

Q: In the book, you mention a growing number of people who describe themselves as “evolutionary creationists.”  So that the lay person can understand, how do their views differ from a Darwinist?

A: “Evolutionary creation” is simply a new name for what historically has been called “theistic evolution.”  Evolutionary creationists are people of faith who believe that God created all living beings, but that he chose to use a process of Darwinian-style evolution whereby, over billions of years, natural selection resulted in higher and higher life forms, ultimately producing human beings.  This position is distinguishable from Darwinism on basically two points: 1) The belief that since God was behind the process of evolution from start to finish, it was not a directionless, purposeless process; and 2) that, although God never intervened in supernatural ways at any point along the upward path of evolution, He did intervene to stamp His divine image on pre-human creatures that had previously evolved along with all other living things.  First and foremost, “evolutionary creationists” are die-hard evolutionists, staunchly defending the Darwinian framework of microbe-to-man evolution wholly apart from any biblical suppositions.  Only secondarily do they insist that the Darwinian explanation is consistent with personal faith and Scripture.

Q: What do you hope readers will glean from this book?

A: I’m hoping readers will come to understand that the popular theory of human evolution is fatally flawed because of evolution’s inability to provide sexual reproduction when and how it would be required in order for Darwin’s Grand Theory to be factually and scientifically true.  I also want them to realize that not even “throwing God at the problem” solves the problem, serving only to cast doubt on biblical inspiration and Christian doctrine.

After graduating from Willamette University School of Law in 1968 and serving for three years as District Attorney for Malheur County, Oregon, F. LaGard Smith has spent a career as a professor of law, principally at Pepperdine University School of Law. Smith is the author of over 30 books on a wide variety of legal, social and religious topics.  He is most widely known as the compiler and narrator of the best-selling The Daily Bible®, with over two million copies sold.  For five years, Smith was Scholar in Residence for Christian Studies at Lipscomb University in Nashville, Tennessee.  After serving as Visiting Professor of Law at Faulkner University's Jones School of Law in Montgomery, Alabama, Smith has now retired to write full time. Smith and his wife, Ruth, reside in Murfreesboro, Tennessee, but also spend time at their cottage in the rural Cotswolds, northwest of London, England. For more information, visit www.lagardsmith.com.

“It is quietly accepted in the scientific community that the advent of sexual reproduction is likely the greatest unsolved mystery in biology.  The fact that Darwinism has no credible answer for the origin of sex (typically asking only why sex would have been advantageous) presents an insurmountable challenge to the theory of evolution.  Accordingly, I highly recommend this book by F. LaGard Smith, a non-specialist whose careful research demonstrates that he understands the crucial issues surrounding the missing sex link, and who has a remarkable ability to communicate complex concepts to a broad audience.” — Geoff Barnard PhD MA, Retired Reproductive Endocrinologist and Cambridge University Research Scientist

“In Darwin’s Secret Sex Problem, LaGard Smith combines sound scientific logic, a thorough understanding of the biology of sexuality, and his unique wit to expose perhaps the greatest secret of SEX—that Darwinian evolution cannot account for its origin!  Open this page-turner and you too will be wondering why many, including prominent evangelical Christians, are tempted to abandon the biblical account of creation for a cruise on the ship of ‘Darwinian evolution’ at a time when it is sinking for lack of scientific credibility.” — John E. Silvius, Ph.D., Senior Professor Emeritus of Biology, Cedarville University