"...a welcome return by one of Christian music's most engaging singer/songwriters...One of Jernigan's strengths is the conviction he brings to every song. Whether a ballad or a faster cut, he sings each tune as though it's his last performance. Here's hoping he doesn't wait five years to do this again..." -- Billboard Magazine "Jernigan sings with fervency on I CRY HOLY, and as his personal testimony verifies, he sings from experience about the life-changing power of the cross..." -- Christian Retailing Magazine

"...songs written to offer hope to the hopeless...compassion is apparent on I CRY HOLY, an album lovers of Adult Contemporary will greatly enjoy..." -- CMCentral.com 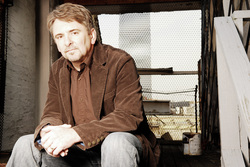 Prolific songwriter and vocalist, Dennis Jernigan, carefully chose the songs on his new solo project, I CRY HOLY.  After all, it has been nearly five years since his last solo project, and when you have at least half a dozen songs consistently listed in CCLI’s Top 100 Most Performed Songs list, the pressure to write “better” could become a burden.  But in the nearly two decades since Dennis began his ministry, he has never had a problem finding verse and melody for his feelings.

“It’s a good thing God gives us Eternity,” says Dennis, “maybe that will give me enough time to express my gratitude to Him.  While I love my old songs, like ‘You’re My All in All’ and ‘We Will Worship the Lamb of Glory,’ and ‘Thank You, Lord,’ the new things God is teaching me about leading people out of bondage and into freedom automatically spills out as music with the message of hope God has put in my heart. Every week I meet hundreds of men and women who struggle with everything from homosexuality to drug addictions. Others have been wounded by childhood sexual abuses to adults ravaged by traumatic events. People desperately need to know that they too can be set free, just like I was.”

Indeed, I CRY HOLY is a strong declaration of praise and adoration.  From the triumphant “Our God Is Mighty” to the emotional title song, Dennis sings like a man who has truly found freedom, and much more.  “You Are The Strength of My Life” is especially meaningful to Dennis.

“This song is my heart song,” he says.  “As I learn more about laying down my life for the sake of others, I know I must become more and more transparent.  It is through a transparent life that His light is free to shine.  And when His light is allowed to shine through freely, His power is released to do far more than we ever imagined. No other god could ever do what my God does!  No other god can take a homosexual and make him a new person.  No other god could take a prostitute and make her a completely new person with new desires.”

Dennis’ story has been told many times.  Having lived as a homosexual in his college years, Dennis was delivered from what he now describes as blatant sin.  And when God delivered Dennis, He put an exclamation point at the end of the sentence. Dennis has been married to his wife Melinda for over 23 years now, and their nine children range in age from 22 to twin boys who are 12.  But even though Dennis’ story is one of freedom and forgiveness, he has, at times, been blasted by not only gay rights groups, but sometimes even by the Church.

“I believe the church at large has dropped the ball on ministry to those with same-sex attractions,” says Dennis. “I've been thinking about this a lot lately. The church was not there for me when I was struggling. Because I heard men in church describe how disgusting homosexuals were to them, I had no confidence they would ever accept me. I was set free at a concert outside of the local church. I was a part of a local body for seven years before I ever shared with anyone else what I had been set free from…and I WAS FREE! I had grown used to the members of the body of Christ rejecting those who struggled with homosexuality and looking down on those who had been formerly involved in homosexual behavior. In those days, I pretty much had to find my freedom on my own, and that wasn’t right then, and it’s not right now. Even today, it is usually a para-church organization that ministers to those who struggle because the church still has great fear concerning homosexuality.  But as believers, I believe it is our job to extend the love and hope found in knowing Jesus Christ, and that requires that we build relationships with people who deal with things that may make us uncomfortable.”

Dennis believes the struggles he has gone through give him a unique perspective into the difficult issues that confront modern-day society. When the topic of same-sex marriage comes up, Dennis is confident in his response.

“I feel strongly that any type of civil union outside the traditions of marriage between a man and a woman weakens the very foundation of a strong society, which is the Family. Though we see many marriages failing, that should not negate the fact that the safest, most nurturing place for a child is found in the bonds of a father and a mother. Children need both masculine and feminine influences. Anything else is less than God's best. Do we need to do better at strengthening traditional marriage? Absolutely. And one of the best places to begin is to maintain the sanctity of marriage between a man and a woman.”

Dennis admits that his roles as husband and father to nine children have taught him valuable spiritual lessons over the years.  “Fatherhood has taught me more depths of God's love than I knew existed. I love being with my children; laughing with my children; blessing my children. I love binding up their wounds and walking with them through the messes they get themselves into. I feel all those things and love my children through them - and I'm an earthly father. How much more does our heavenly Father love us?!

“But one simple truth has done more to take me to deep levels of freedom than anything else --I don't get to decide if God loves me. My children don't get to decide if I love them. With God, I have two choices at any given moment and in any given circumstance. I can either accept His love or I can reject it. Guess which way leads to freedom? The things I have learned about God’s love through my children should keep me writing songs for at least another couple of decades.”