The Redemptive Journey of First Call

"Longtime Christian music fans will rejoice when they hear this amazing project...hearing these wonderful voices perform these classics a cappella is a taste of heaven right here on earth."  -- Billboard Magazine

"...it's good to hear this talented trio back in action. Since all three vocalists still have the pipes, perhaps REJOICE is only the start of a new career phase." --ChristianMusicToday.com

"...they are as sharp vocally as they ever were...they sound like they've never been apart...from jazzy Manhattan Transfer jive to classic, near operatic hymns, First Call does it all, and does it all with aplomb..." -- Lifeway.com

"These songs are gorgeously rendered, the harmonies impeccable...Classic First Call...my repeated usage of the word 'classic' is intentional, they are the very definition." -- ChristianMusic.Suite101.com

"Bonnie Keen, Marty McCall and Mel Tunney are magnificent singers individually, but together, they're truly something...this is First Call's first hymn project. But it was worth the wait." -- MusicNewsNashville.com 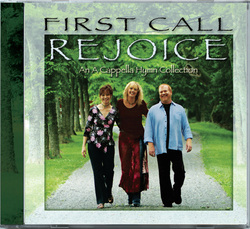 Bonnie Keen and Marty McCall didn’t know it at the time, but Mel Tunney was sitting in the balcony the first night Marabeth Jordan stepped into the spotlight as part of the award-winning trio, First Call.  What none of them could possibly foresee in that moment was the dramatic impact that change in personnel would have in all of their lives.

It all began in an inconspicuous way. Three talented singers became known as the “first call” by Nashville producers seeking vocalists who could effortlessly provide stellar background performances for major artists and commercial jingles.  Neither Mel nor Bonnie nor Marty really desired a recording or touring career.  But just for fun, they agreed to record an a cappella Christmas album one year called “An Evening In December.”  It became an instant classic, and propelled the three reluctant stars into the spotlight. Offers began to pour in from Christian superstars such as Amy Grant and Sandi Patty to join them on the road.  And First Call found themselves thrust from an intimate studio setting to the bright lights of major auditoriums, singing for thousands of people every night.

The trio began to make their own mark on the Christian music industry with songs like “Undivided,” “Lord Of All,” The Reason We Sing,” “O Sifuni Mungu,” and “Sweet Love,”  racking up nine #1 radio hits and several top 10 songs.  Dove Awards, Grammy nominations and all the accolades began to accumulate, including being named the Gospel Music Association’s Group Of The Year two years in a row.  By all accounts, the sky was the limit for the talented trio.

In 1990, Mel felt led to leave First Call and join her husband Dick Tunney in their own concert and songwriting ministry. It was a decision she did not take lightly. “Sometimes you hear about a group breaking up and there is dissension and strife for years to come,” Mel states. “With the three of us, there was none of that.”

And then came that fateful night when Bonnie and Marty stepped on stage with Marabeth to continue the ministry of First Call.  The new trio continued to be a fan favorite and went on to record two more critically-acclaimed projects, “Human Song” and “Sacred Journey.”  Five years later, on the verge of signing the largest recording contract of their career-- time, chance and life happened to First Call.  While on tour with a high-profile male artist, Marabeth became entrenched in a public scandal which led to her resignation from the group.  Bonnie and Marty were heartbroken.  And ironically, one of the first people Bonnie turned to was Mel.

“Mel cried with me when I told her,” says Bonnie.  “Our friendship and love for what First Call represented had never changed, and she was one person I knew would understand my grief.”

In spite of the devastating blow, Warner Alliance signed Marty and Bonnie to record two projects as a duo.  “Beyond December” and “First Call” produced more avenues for ministry.  Yet, the blemished image and loss of the trio sound left First Call at a crossroads.  Bonnie and Marty peacefully, and reluctantly, parted to pursue solo ministries. Marty recorded Images of Faith, a project of contemporary ancient music, writing many of the lyrics with his wife, Vickie.  Bonnie put both her vocal skills and writing talents to work, recording two albums, Marked for Life and God of Many Chances, as well as penning three best-selling books, Blessed are the Desperate for They Will Find Hope, God Loves Messy People, and A Ladder Out of Depression.  She continues to be an in-demand speaker/singer, sharing stories of God’s hope and restoration with transparency, poignancy, and honest humor.

“I love how ‘The Message’ states Proverbs 24,” says Bonnie, “It says, ‘If you fall to pieces in a crisis, there wasn’t much to you in the first place.’ When life comes apart, it shows what our faith is made of. I began to discover that God wanted me to use the broken places in my personal and professional life to speak hope to others who were hurting.”

“People still ask about Marabeth, “says Bonnie. “She was a tremendously creative and talented member of First Call, and nothing will change her contributions. Questions naturally arise because she was a valid part of First Call’s history. We grieved with her and for her family, and are grateful that God has restored our friendships beyond the circumstances that caused her to leave.”

“Needless to say, the whole thing has been a roller coaster of grace and feeling like kids in a candy store!” Bonnie laughs. “When we started work on the Hymns CD, we laughed and cried with joy through our first three days in the studio together.”

“Hymns have always been a huge part of who Bonnie, Melodie, and I are - individually, and as a group,” Marty explains. “We have sung various hymns together through the years, and so when we decided to do the CD a cappella, it felt natural to make it a Hymns project.”

In all their years of recording, First Call never did a Hymns project.  And Bonnie thinks there was a reason for that.  “What a precious project to work on now, after all that has happened to us,” she says. “It feels so good to sing vertically at this point.”

Featuring arrangements from David Hamilton, Travis Cottrell and David Maddux, REJOICE takes the group full circle, back to what started it all – the unique, Manhattan Transfer-ish, jazzy, intricate vocal stylings First Call was always known for. Bonnie’s husband, Brent King (who just won his fourth Grammy Award for engineering/production), has served as the project’s producer.

There’s nothing like an original, and REJOICE is back to basics for First Call.  “This is the original trio,” enthuses Bonnie. “The original First Call.....allowed to begin again....a rebirth, so unexpected, so merciful and healing....and for anyone who listens, you’ll hear the hope of the three of us -- still united, still friends, still undivided in heart.”

“We honestly never dreamed we would be back on stage with each other again,” says Mel.  “But God has been so faithful in the midst of so many things.  His redemptive heart shows up when we least expect it.”