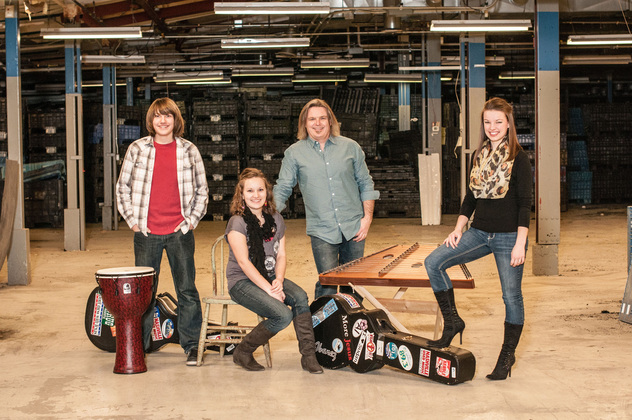 Tom Frye and the Frye Family Band got the phone call that many artists would dream of receiving.  A new reality show was interested in featuring them in an upcoming series.  Reality shows have become a phenomenon in television in the past few years, and the overwhelming success of shows such as Duck Dynasty have made the realty genre a launching pad for people to find fortune and fame.  So Tom knew he had to at least give them a call back. And he did.  Little did the show know that the Frye Family Band was about to add another element to their repertoire with the release of their first book, 101 Devotions for Busy Families. As with everything else they do, the Fryes wrote the book together with wife Lisa and all three kids contributing their own devotions.  It was a project that came naturally to them.

“Having regular family devotions provides a sense of stability,” says Tom.  “Over the years, we would read through scripture or a devotional and many times the text would speak directly to a need or situation, opening up opportunities for Lisa and I to share in a very personal way with our children.  Sometimes they would lead to the kids sharing thoughts or feelings which might have otherwise gone unspoken, and potentially festered beneath the surface. Devotions have brought not just the peace and stability of God's directing in our lives, but also helped build trust, understanding, and patience when dealing with those inside and outside our home. By practicing the discipline of leading our families in prayer and scripture reading, we model the importance of faithful leadership in our own homes.” 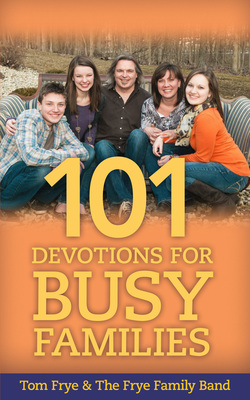 Though Tom wrote the majority of 101 Devotions for Busy Families, he is quick to point out his lack of scholarly accomplishments. But he does have one thing going for him that he believes will connect with parents – honesty. “The world is not impressed by the number of scriptures we have memorized, our piety, or how faithfully we attend church,” says Tom. “They often dismiss scripture as outdated or irrelevant, but when we can speak personally about how God has met us at our point of need, what we were before and how His love has transformed our lives, they cannot argue with it. They may not view us as biblical scholars, but we totally have the authority to speak on our individual stories, because those are personal, tangible and relevant.”

Tom’s honesty has always spilled over into his music as reflected in the songs of the band’s new EP, Alive For the First Time. The EP features some serious, emotional songs such as “I Will Strive No More,” co written by Tom and Andy Gullahorn. The song was inspired by an exchange of letters between Hudson Taylor, a 19th century missionary to China, and a friend with whom Hudson was sharing his struggle of dealing with spiritual burn-out.  “I could easily relate to the frustrations Hudson was pouring out in those letters,” says Tom.  “They were borne out of the same struggle we all face when we choose to be self-reliant and attempt to live out our call in our own strength. The letter was so rich with honest emotions and vulnerability.  One portion reads, ‘There is rest! I have striven in vain to rest in Him. I’ll strive no more. For has He not promised to abide with me—never leave me, never fail me?’  That letter turned into a confessional prayer for me.”

The EP also includes less serious moments with songs like “Family Band,” written to answer the numerous questions they often get while traveling together. “This is a very light-hearted look at what it is like when we travel,” says eldest daughter, Kaylyn. “My favorite part of performing this song is just watching everyone's faces as we sing through it.” But while the song pokes fun at the lighter side of traveling as a family, it doesn’t capture all the nuances of being a real-life Partridge Family.

“The good thing about a family band is that practices are fairly easy to schedule,” jokes middle daughter, Maggie. “But sometimes long nights on the road, trying to record with a sore throat, or having your little brother pushing for a Star Wars marathon in the van can be less than a positive experience. In the end, however, making music with people I love far outweighs any negative moments.”  Brother Jonathon (the Star Wars fan) agrees. “I like traveling because you get to meet new people and see new things, like when we sang at a radio station in Florida and then went to the beach to hang out.  We combine work with play a lot.”

Wife Lisa, however, sees the character-building side of things. “Sometimes we don't know exactly what we are walking into, where we'll stay or maybe even when we'll be eating.  This can create tension.  But seeing how God works it out and how we have learned as a family to 'go with the flow' is very encouraging.  During those trying times, it is very important to teach the kids that life doesn't always go as we plan, but being content in all circumstances is exactly what God desires and we can shine His light bright when we do. When Tom and I became parents, we wanted to be deliberate in raising our kids.  And we believe that anything of value doesn’t just happen.  It takes sacrifice, hard work and purpose.”

Because of Tom and Lisa’s approach to parenting, including homeschooling all three of their children from grade school to high school, they formed Family First Ministries to encourage parents to make family life a priority.  “There was a time in my life when I was so consumed by pursuing a career and the approval of others that I was neglecting the most important people in my life, my wife and children,” Tom admits.  “A friend reminded me that my family is my first ministry. The Family was the first institution God established, and yet it is so easy in our fast-paced, get-ahead society to unintentionally push our family to the side.” 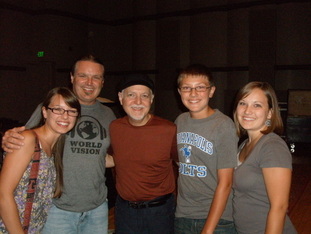 The Fryes with Christian music legend, Phil Keaggy
While most families will not perform music or write books together, Tom insists that ministering together is essential.  “For the first seven years of our lives together, Lisa and I gave in-home care to my elderly grandmother. She was there as we brought all three of the kids home from the hospital, and the kids loved helping attend to her, putting her to bed, even helping her put on her slippers. While it was a difficult season, it was also rewarding and taught us a lot about hands-on ministry.  After her death in 1999, God began shifting our ministry from being focused on one person to a ministering to many people. So, ultimately, my hope is that our story can inspire families to serve together, beginning in their homes and then to whomever God calls them.”

So, after Tom explained all this to the reality show, the producer then presented a question that stopped Tom in his tracks.  She asked, “So isn’t it weird for a dad to write and perform songs with his kids?”  That one question, says Tom, is why the Frye Family Band will not be a “dynasty” on television anytime soon.

“It struck me that she could have asked that same question in numerous ways,” says Tom.  “She could have said, isn’t it fun or neat or used any other kind of positive spin.  When I heard that question, I knew our answer was going to be no.  I could tell they weren’t looking for a functional family. They were looking for dysfunction.  I think there are plenty of shows to watch on television where people can view that.”

Kaylyn is now enrolled in college with Maggie not far behind, and Tom is realizing his family band may look different in the coming years, but the message he wants parents – especially dads—to hear will still be loud and clear.

“Seeing our oldest graduate this year has reminded me to take every moment captive,” says Tom. “Because I grew up in an unstable household, I know the damage that can be done to a child’s soul when a mother and father are not on the same page.  Lisa and I realized early on that the word ‘parent’ is a verb, and we’ve tried to be deliberate in all we’ve done with our kids. I hope they take that legacy with them wherever they go.”