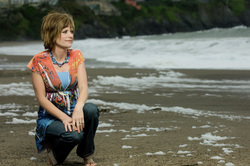 After eight thousand miles and many long months, Ginger Millermon was about 30 minutes away from rescuing a little girl she already referred to as her daughter.  But she couldn’t get there.  As they made their way through the country of India, Ginger and her husband Joel were told an assassination had led to violent riots against Christians and many were being martyred in the streets near the very town where they were headed.  The man assigned to take Ginger and her husband to the orphanage told them to stay in the hotel and not go anywhere, fearing for their lives.  “We felt very isolated and vulnerable,” Ginger recalls. “We had met another American couple who were also adopting and we spent that whole day together, praying for protection and praying we would be able to get our daughters and return home to our families.  Churches were being burned and Christians were being killed. It was horrifying. We waited nervously, watching the flames and riots on our television in the hotel, wondering if we’d even be able to make it those last few miles to retrieve our little girl.”

It seems as long as Ginger can remember, she’s been fighting for the lives of her children.  Ginger has told the heart-wrenching story of her twin son Jarrott on many national television and radio programs and in churches and conferences across the nation.  When doctors told the Millermons that Jarrott should be taken off life support, Ginger and her husband refused.  Jarrott miraculously survived, but the doctors warned he would most likely suffer from cerebral palsy or worse.  Though he went through numerous touch-and-go medical emergencies the first few years of his life, Jarrott is a healthy and active teenager today. The Millermons’ staunch pro-life stance for their son in the face of what doctors described as certain death has endeared Ginger to women’s conferences and pro-life organizations around the world.  The added success of her first national CD, AMAZED, only heightened her ability to connect with audiences as three of the CD’s songs reached the top 10 on the national Inspirational radio charts.

With her new CD appropriately titled RESCUED (produced by LifeWay songwriter/producer Paul Marino), Ginger has expanded her songwriting into more praise & worship-oriented tunes such as “The Lord on High is Mighty,” and “The Risen Christ in Me,” while still offering songs that are honest and forthright. The first radio single is an unapologetic declaration of faith in the acoustic-driven “Who He Says He Is,” a song that takes on major issues including the biblical definition of marriage and the sanctity of life.  And “You Knew Me” could easily become the perfect theme song for any pro-life foundation or organization with lyrics that mirror Psalm 139: “You knew me before my heart was made there in the secret place – You knew me before I took a breath or lived one day…”

While her music wins her fans, Ginger’s story endears her to them.  With the release of her book, Grace Thus Far, Ginger has opened up the old wounds her family has endured and allowed herself to go back and expound on passages in her personal journal during the worst moments in Jarrott’s young life.   As both an author and musician, Ginger has been able to expand her speaking opportunities in conjunction with her concert schedule.  And it was after a long stretch of being on the road that Ginger and her husband Joel got the first inkling that adoption was in their future.

“We had just returned from a long tour and I was sifting through all my emails,” says Ginger.  “There was one from a friend who had adopted from Russia and every once in a while, she would send emails of other children needing homes. I usually never opened those emails, knowing that looking into those precious faces would tear me up. But this day, I opened it up. There on the screen were ten beautiful girls in Orissa, India who had just been brought into the orphanage. One face right in the middle jumped out at me. I closed the email as quickly as I could, but over the next couple of days I found myself getting up at night and opening the email and zooming in on that one particular little face. I couldn't get her out of my head. Finally, I asked Joel if he had opened the email and he had. And he was drawn to the same little girl! Although we hadn't been planning to adopt, we knew God was working in our hearts to rescue Shasmita.” 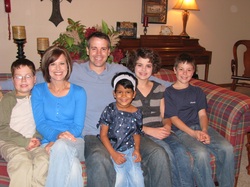 So after a very long year of legal wrangling, the Millermons were within driving distance of their little girl, trapped in a country where everything seemed to be going awry.  But after 24 hours of uncertainty, the Millermons found their daughter – their fourth child—and began the process of acclimating her to a new home and a new life.  And Ginger quickly found out that love really is aboutpatience.  As happens with many adopted children, Shasmita began to bond with only one of her new-found parents – and it wasn’t Ginger.

“I had read the books and researched online,” says Ginger, “and I knew that often when a child came home, they bonded with one parent at first and not the other. But I assumed that Shasmita would bond with ME! I am, after all, a seasoned Mommy! I tried everything. I gave her all the good stuff --her first bubble bath, the yummy food, the cute clothes, the dolls. It didn’t matter. She acted terrified of me. In fact, she would scream if I got too close or tried to hold her. On the flight from Delhi to London, I was struck by a sobering thought--I had sacrificed and prayed for this child for over a year. I had planned, cried and longed for her with my whole heart. I had traveled across the globe to rescue her from a horrible life. And she rejected me. I was crushed.

“Then it dawned on me what God must feel when I do the same to Him.  He sacrificed His beloved Son for me. He forgave me, loved me, cleaned me up, rescued ME and adopted ME. And yet I have chosen to reject His plan for me so many times in my life. But I was struck by the fact that even when I sin, He chooses to continue to love me unconditionally. As I sat on that long flight thinking about God’s mercy, I made a choice to love my daughter unconditionally. No matter how long it took, even if she never loved me, I would steadfastly give her my constant love and care.”

That insightful moment became one of the first songs Ginger wrote for the new RESCUED CD.  “God’s Mercy” is a very intimate tune; a season-by-season account of Ginger’s life wrapped up in a breezy melody. From her childhood salvation experience to the most horrible days of Jarrott’s ordeal to the moment she first held Shasmita in her arms, Ginger gives a very personal account of God’s presence along her journey--a journey that Ginger has learned to embrace even in the darkest moments.

“I have walked on the dark, hopeless side of the valley and I have felt the suffocating pain of loss,” she says. “And even in those moments, I have miraculously felt God’s peace. We serve a God of hope and nothing is impossible for Him. I truly want every person that hears these songs to know that they are not alone and He is holding on to them.”

So as the Millermons settle in with a new addition to the family, now evenly matched with two boys and two girls, Ginger admits that sometimes her kids teach her things about God she always thought she knew.

“Shas and I were chatting over pizza the other day and she looked across the table and asked in her thick accent, ‘Did you always want an Indian princess with black hair and brown skin?’  ‘Why, yes, I did!’ I assured her. She thought about that for a minute and said, ‘I did not like you in India.’  Appreciating her truthfulness, I responded, ‘I know. But you like me now, right?’ She blossomed into a smile, ‘Oh yes, Mommy, I love you now.’  In that moment, every single sacrifice we made, every tear we shed and every hurtful rejection just faded away. And it occurred to me that God must feel those exact same emotions when I understand and acknowledge the depth of His love for me.”