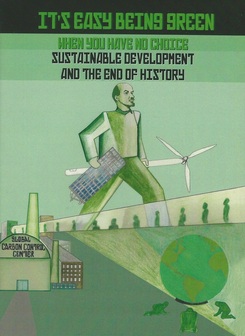 For Immediate Release -- A new documentary claims to expose the anti-Christian agenda behind the global environmental movement.  The new film entitled “It’s Easy Being Green When You Have No Choice” features some of the top experts on the green movement.  The narrator for the film is former meteorologist and current morning host at KSFO Radio in San Francisco, Brian Sussman, who has authored two books entitled Climategate: A Veteran Meteorologist Exposes the Global Warming Scam and Eco-Tyranny: How the Left's Green Agenda will Dismantle America.  The documentary also features Marc Morano, Executive Director and Chief Correspondent for Climate Depot; Beverly Eakman, former writer for the U.S. Department of Justice and Executive Director of the National Educational Consortium; Steven Mosher, President of the Population Research Institute; Randal O'Toole, Cato Institute Senior Fellow; John L. Casey, President, Space and Science Research Corporation and former White House space program advisor and consultant to NASA Headquarters; and E. Calvin Beisner, Ph.D, founder of Cornwall Alliance. Dr. Beisner wanted to be part of this important documentary to convey a Biblical perspective of earth stewardship.

“Christians should learn from this film that faithful stewardship of the earth doesn’t require joining the environmentalist movement or opposing economic development,” says Beisner. “Quite the contrary, faithfully fulfilling God’s call, in Genesis 1:28, to fill and rule the earth means learning to develop resources wisely to meet human needs while minimizing harmful side effects. They should also know that much of the Green Movement has hidden motives that threaten liberty around the world, undermine the economic productivity necessary to raise and keep societies out of abject poverty, and diminish respect and protection for human life.”

“Environmentalism is a repackaging of pagan ideas that puts nature above man,” says Pinski. “Environmentalists blame Christianity for the degradation of the earth by the rejection of pagan beliefs, and because Christianity elevates man above nature. For example, the Earth Charter, a statement designed to be a guide for living in a sustainable environmentally-conscious way, is seen by its creators and supporters as a new ‘Ten Commandments’ for the earth.”

Dr. E. Calvin Beisner
Dr. Beisner says that the documentary informs Christians and non-Christians alike of the origins of the Green Movement and the ultimate goals they are looking to achieve.

“The Green movement perceives the general public as consumers and polluters, a threat to the earth,” says Beisner. “Environmentalism relies on false or highly dubious claims of environmental catastrophe to frighten people into embracing policies that are destructive to their lives, their liberties, and their property. But as Christians, we understand that people serve as producers and stewards, capable of improving the natural world at the same time that we serve human needs.”

About Dr. E. Calvin Beisner:
Dr. E. Calvin Beisner is founder and National Spokesman for the Cornwall Alliance. He is a scholar on the application of Christian worldview, theology, and ethics to economics, government, environmental stewardship, and public policy. A professor of interdisciplinary studies at Covenant College from 1992 to 2000 and of historical theology and social ethics at Knox Theological Seminary from 2000 to 2008, he has taught theology, apologetics, ethics, church history, economics, and other disciplines. He has written four books on population, resources, economics, and the environment; eight other books; contributions to over 30 books; and hundreds of articles. He has testified as an expert witness on the ethics and economics of climate policy before Congressional committees and lectured for churches, schools, colleges, seminaries, and conferences around North America, Europe, Africa, and Asia.

Why Christians should see this documentary...

Ø  Christians need to be aware that environmentalism is a repackaging of pagan ideas that puts nature above man.

Ø  Environmentalists blame Christianity for the degradation of the earth by the rejection of pagan beliefs, and because Christianity elevates man above nature.

Ø  Environmentalists believe that freedom is the ultimate cause of global warming and why managerial supervision is needed to "save the planet.”

Ø  The Earth Charter, a statement designed to be a guide for living in a sustainable environmentally-conscious way, was supposed to be inclusive of all worldviews, but the only “Christian” representative allowed in the original founding was a Marxist.

Ø  The Earth Charter is seen by its creators and supporters as a new “Ten Commandments” for the earth.

Ø  The environmental movement has adopted Marx’s worldview and teachings, such as people are all material and there is no metaphysical aspect of existence. It seeks to encourage people to turn away from organized religion and, instead, worship nature.

Ø  Lynn Townsend White, a medieval professor at Princeton and Stanford universities, developed a theory that Christianity was the cause of the ecological crisis.

Ø  The environmental movement wants to replace Christianity with a new religion that sees nature as a god to worship.

Ø  Poverty is considered sustainable by environmentalists, and one of their goals is to make or keep people poor in order to keep a society sustainable.