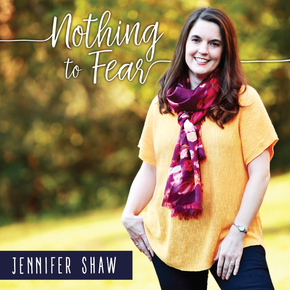 Author, speaker, and Telly Award-winning singer, Jennifer Shaw, readily admits it has been a long time — six years in fact —since her last full-length CD. But then again, she has been a little busy. Her reasons for waiting are reflected in the songs on her new project, Nothing to Fear, produced by Lifeway’s Paul Marino.

From the opening lyrics of the title cut—“Whenever you want, wherever you lead, whatever you say I will do, no matter the cost”— it is readily apparent that Jennifer and her family have been through six years of life-changing experiences. While Jennifer was challenged as a mother when her youngest son, Toby, was diagnosed with a severe case of Sensory Processing Disorder, nothing really prepared her for adopting three Chinese children with medical issues, ages 7-11, in the span of 18 months. But all her years of traveling and partnering with Compassion International gave Jennifer a glimpse into the lives of older children whose chances of getting adopted fall drastically after the age of three.

“It would break my heart to go into these orphanages and see these children, knowing they were probably destined to be in that orphanage until they were teenagers and then sent out on their own,” says Jennifer. “I think that’s one reason it can be overwhelming to people who consider adoption. You go into a place like that and feel like the need is so great you can’t do anything to make difference. I knew I couldn’t help them all, but I could help somebody.”

The first “somebody” was Noah, a little boy they adopted in 2016 who had a critical heart defect. The Shaws knew there was a chance that Noah’s heart was too far gone to fix, but they also knew God had pointed them directly to him— not once— but twice. 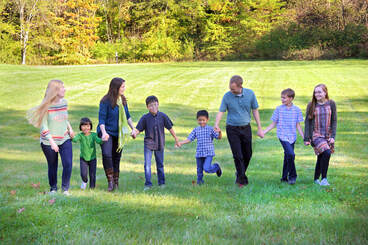 “I was looking online through our agency’s list of children from Uganda,” says Jennifer. “They have waiting children listed on a web page that is alphabetical by country, so I had to scroll through China to get to Uganda.  As I was scrolling, I felt the Holy Spirit whisper to my heart, ‘Stop. Look at that boy.’ I stopped and saw Noah for the first time. Of course, at the time I didn’t know Noah was my son, but I read his description and thought if someone had written a description of my own son, Toby, that would have been it. Noah was two years younger than Toby, he loved Legos, reading, school and soccer. Only one scary thing – he had a critical heart defect.  We decided to pray about him and moved on. I was honestly too afraid of his heart condition. Three days later, I was online at Rainbow Kids which has thousands of children listed.  Again, I was scrolling when I heard the Holy Spirit whisper to my heart, ‘Stop. Look at that boy.’ I did, and I was halfway through the description before I realized this was the same boy, it was just a different picture.”

But the photos didn’t show how sick Noah truly was. The Shaws took his medical records to their local U.S. doctors and the news wasn’t good.

“Their prognosis was very grim. It was like they were giving my child a death sentence before we even brought him home. I just didn’t think I could handle it. But my husband looked at me and said ‘How could we live with ourselves if we turn our backs on this boy now?’ Our assignment on earth is not to live a long time. Our task is to know Jesus. And we knew, even if we were bringing Noah home to die, if we could introduce him to Jesus, we would be giving him eternity. So I wrote the song ‘A Greater Love’ even before we went to get Noah. The song talks about my love for him as a parent being just a small reflection of God’s greater love.”

When the Shaws picked Noah up in China a few months later, they quickly realized his condition was very serious. He could hardly walk up five steps without turning blue. Jennifer’s husband, Nathan, had to carry the 9-year- old everywhere they went. After getting Noah home to the U.S., they took him to doctors who had given him a 20% chance of still being operable as this condition is normally treated when children are born. Miraculously, his heart was still operable, and that intervention has completely changed Noah's quality of life and given him a much longer life expectancy. Noah’s heart was physically improved, and Jennifer began to get a glimpse into the emotional heart of her new-found son that set the course for the next few months.

“Noah said ‘Mama, our van seats eight.’ I said, ‘That’s right.’ And then he said, ‘But we only have six in our family. So many children in China need families.’ Noah had only been with us for four months at that point, and I was already seeing the sweet, kind heart of my son.”

In the next few months, the Shaws adopted Ethan and Anna from China, and the van is now full to capacity. The song on Nothing to Fear that probably encapsulates the family’s passion for adoption is a tune Jennifer penned called “Forever Family.”

“The phrase ‘forever family’ is used in the adoption community. I could have easily written a song that made everyone cry, but instead, I decided to make this an uplifting tune that is a good reminder of what family is all about, and that every child deserves to have one.”

Looking back over the course of her life, Jennifer now understands that the earlier struggles she endured — her near-death from a pregnancy, her father dying of ALS, and parenting a special needs biological child — all prepared her for this season of her family’s journey.

“All of those difficulties we went through taught me to totally rely on God, and that He really does use all things for our good,” says Jennifer. “A lot of things I used to think were very important are no longer priorities. We are put on this planet for one purpose — to know Jesus and to make Him known. God’s faithfulness in the past is what gave me the courage to do something that initially made me very fearful — adopting older children from another culture who have medical issues. But taking God at his word and believing that there was nothing to fear have brought me the greatest joys of my life. I can’t imagine my life now without all six of my kids. And I’m really glad that van is still running."
### 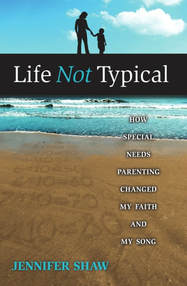