Critical Acclaim for "Face to Face with God"

_ "Maxim tells how as a teenage alcoholic, he found himself face to face with God after a tragic auto accident—one that destroyed his looks, but renewed his life…An evangelist at heart, Maxim urges readers to follow Christ…rich resources for those who want to share their faith…”– Christian Retailing magazine

“…a must read for anyone who experiences hopelessness or despair, or feels trapped by addiction, circumstances or life in general.” – CBA Resources magazine

“…a story that immediately brings the testimony of the apostle Paul to mind…an explanation of how faith and life should be linked together…it’s pretty clear that a miracle occurred and that Maxim’s life was never the same again.” – Hollywood Jesus 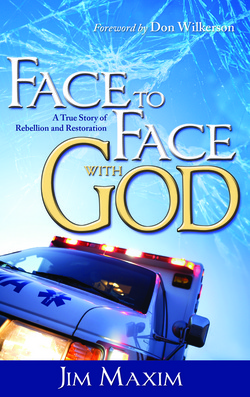 "To the hospital staff, I was unconscious. But inside my mind, I was wide awake and facing two of the ugliest creatures you can imagine...two demons. They were standing there because they had come to claim their property. They were sure that it was time for me to die.” – Jim Maxim, author of Face to Face with God.

Face to Face with God (Whitaker House Publishing) is the true story of a life restored and redeemed from addiction, self-destruction and rebellion.  ”I wrote this book for people like the old me who may feel like ‘lost causes,’” Maxim said. “I’m living proof God answers prayer, and that absolutely no one is beyond His reach.”

Now a successful Philadelphia businessman, husband, father and grandfather, Maxim has dedicated his life to sharing the love and power of Jesus he found at the lowest point in his life. For years he has worked one-on-one with those who can relate to his story, actively volunteering for a variety of inner-city ministries with his wife, Cathy. He and Cathy also founded of Acts413, a ministry dedicated to encouraging Christian pastors and leaders through prayer and discreet ministerial support to those that serve as shepherds to God’s people.

Maxim’s Acts 413 organization will sponsor the 2nd Annual Prayer Gathering and Ministry Leadership event in Philadelphia on July 12.  Pastor Jim Cymbala of Brooklyn Tabernacle, Gary Wilkerson son of David Wilkerson and pastor of The Springs Church, and Pastor Tony Evans of Oak Cliff Bible Fellowship are scheduled to be the guest speakers.  The Brooklyn Tabernacle singers will be performing a concert in the evening.  The first Prayer Gathering event held last summer by Acts 413 was attended by nearly 3000 pastors and lay leaders in the Philadelphia area.

As a speaker, Jim joined his friend Dr. Herbert Lusk, pastor and former Philadelphia Eagles running back, to share on the theme of unity in the church body at a New York Pastors Retreat early this year. Jim and wife Cathy traveled to Cuba last year to teach a marriage conference for Christian pastors in that country and will return to minister again in the fall of 2012.  Jim shared the stage with Prison Fellowship’s founder Chuck Colson at the Lino Lakes Correctional Facility in Minnesota.  Jim was also the guest speaker the Teen Challenge 2012 graduation ceremony.  God has opened many doors for Jim to speak at various prisons in recent months including plans to minister to men in various Mexico prisons later this year.  Jim has been asked by Prison Fellowship to speak to their entire U.S. staff in the coming weeks.

Face to Face with God has been endorsed by a variety of Christian leaders including Dr. Jack Hayford, popular pastor and author, as well as Teen Challenge President Don Wilkerson, who wrote the foreword to the book.

Maxim is founder and president of Maxim Automotive and MaximTrak Technologies which helps automotive retailers and OEM’s manage and improve profitability and compliance. Maxim serves on the boards of various ministries including People for People and World Impact and is the chair of The Hope Center, an inner-city crisis pregnancy center. Maxim also works with various mission organizations in Africa, ministering to both pastors and children.