John Mandeville
We Belong to Heaven 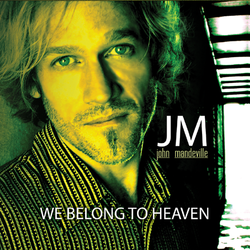 “When you get handed a foreclosure notice and an IRS audit while you’re watching your car being repossessed and towed out of the driveway, that’s a pretty bad day,” John Mandeville recalls.  But before that “bad day” occurred, John was one of the most acclaimed songwriters in gospel music, writing hit singles for the lauded likes of Avalon, 4Him, Point of Grace and Tammy Trent, among many other top artists.  His #1 hits kept accumulating as did his Dove Award nominations, including three nods for Song of the Year honors.  He soon found himself on the brink of mainstream success with the backing of some of the top names in secular music. That is, until it all came crashing down around him.  And John is the first to admit, he didn’t handle it well.  And that “bad day” began a spiral downward that John candidly admits led to enormous frustration and some very ugly manifestations in his life. But it also led to some truly honest songwriting now highlighted in his solo debut CD, We Belong To Heaven.

In a strictly artistic sense, We Belong To Heaven is an ambitious inspirational pop undertaking, that’s just as likely to resonate with fans of Sting as Steven Curtis Chapman, characterized by stirring instrumentation and an even more empowering lyrical undercurrent. And John certainly means every word of his life-changing story. “This project really wrote itself as a result of what I was living through, it was meant to be a monument of change for my family, sort of like David wrote the Psalms,”John recalls. “This was the turning point, the line in the sand, to see all the drama come to a close.  It was my chance to find my heart and return to a place of hope, while also returning to the heart of who I am as an artist.”

Beyond the self-penned songs, John also sings, writes, plays keyboards and guitar, plus    produces and mixes the project (with mastering by five-time Grammy Award winner Richard Dodd). Armed with an uplifting, guitar-centered sound along the lines of Chris Tomlin with the electronic elements of the David Crowder Band and tender piano reflections, We Belong To Heaven is a remarkably humble, but instantly attachable album for a variety of life’s seasons. Despite being written during a time of uncertainly and wrestling, the project points back to ultimate surrender to God.

“Nearly all of the songs on this CD were written in direct response to some impossible circumstance in our life,” continues John. “We were going through some severely difficult times when I was working on this CD, and worship was the only thing that brought us through. It transformed me, my marriage and our family. We chose as a family to worship through the impossible until God made it possible.”

Things did indeed look impossible to John and his wife, Shelli.  John’s out-of-control addictions led to many combative arguments and increased tension.  John’s failures in his career only exasperated long-held shame issues that were beginning to take their toll on both his faith and his family. The couple eventually sought professional counseling and John remembers those moments of fear and hurt like it was yesterday.  “I remember sitting on the counselor’s couch and agreeing we’d try another 30 days,” says John.  “When your marriage comes down to time frames, you know you’re in a dangerous place.”

John had to face himself and get real with his wife about his addictions as well as the fact that he had literally leveraged their future, bringing them to the point of bankruptcy.  “I came to a place where I realized I was not only out of control, but that I was a complete disaster of a husband, father and business man.  So I just got honest with God about my hopelessness and said, ‘if You are the same God I’ve been writing about all these years, then I need You to intervene in my life because I have messed up royally.’  And for the next seven days, I just prayed and waited on Him.  Out of the blue, people started coming to the door with money and keys to vehicles.  It was overwhelming. It was the beginning of a new way of life for me and my family.”

John also had to repent to his family.  He remembers working for ten days straight – locked down in his home studio – then coming into the kitchen one evening and the kids saying, “Hey look! Dad is home!”  He realized then that something had to change.  “One night, I took my wife andkids in my arms and asked them to forgive me for not being there for them, for putting my career above my role as a husband and a father.  We had communion together that night as a family, which we still attempt todo on a regular basis.  With four kids it isn’t always easy!I think a lot of men struggle with balance in their lives.  But I am determined to minimize the death bed regrets in my life.  I want to live from the end of my life back.”

John never really intended to release this CD on a national level.  He just began writing songs to God rather than about Him, and the honesty shines through. Songs such as “Who Do You Say I Am” and “Free,” the former of which discusses humanity’s attempt to live up to Godly standards (with grace bridging that great divide), while the latter speaks of unceasing hope, letting go of past bondage and finding ultimate freedom in Christ. And the CD’s first single and music video, “Glorify,” is what has been described as John’s modern-day Psalm.

“’Glorify’ is just me saying to God, ‘Here, God, this is my life. I wish it was something worth giving you, but it’s really a mess. Somehow, please glorify yourself through it.’ There’s a line in the song that says, ‘Jesus, Your heart was breaking for mine,’ and I know that in my darkest moments, He was giving me the grace to stand and face another day. When I think about this expansive, seemingly endless universe that God oversees and the fact that for over two years, He was literally bringing people to our doorstep so we could pay our electric bill, it is beyond humbling.”

“So many people are living lives of defeat and have an anemic Christian experience, because the only time they spend directly in the presence of God is for an hour on the weekend, if that,” he asserts. “This was true of me. Still we wonder why our lives are incongruent, defeated and not lining up with what we say we believe on Sundays. We are continuously connected to God and His presence is always available. It’s up to us to commit to staying tuned in. Over and over, we have watched as we choose to worship rather than worry-- God has shown up miraculously and continued to transform our lives.”

And as a result of that openness and direct application, John hopes to inspire listeners to a similar way of life, replacing problematic       situations with peace, and feelings of powerlessness with praise. “I just hope that through putting my own failures, my own wrestling with God and myself honestly on the page, that people will find hope in their humanity and comfort in a God who is foreign to the idea of not loving us,” John concludes.

“It’s been a process of walking step by step to put my marriage back together, coming out of an addictive lifestyle, and giving my family vision and purpose,” he adds. “I didn’t really intend to get back into the music business, but after a long detox from the industry, I picked up my guitar and found myself at a keyboard, writing about 35 songs that came down to these, while pulling a few from a catalog I had written previously. For the most part, the songs on We Belong to Heaven were all written in response to impossible circumstances in my life, but God showed up for me and I have no doubt He will for listeners as well.”