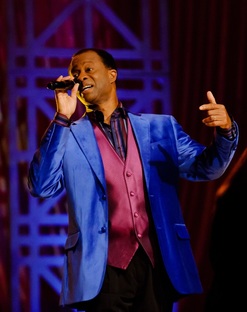 A concert critic recently described Larnelle Harris as having a “larger-than-life stage presence with impeccable vocal prowess.” Admired by fans and peers alike for his majestic tenor voice, Larnelle has become the personification of talent and integrity in a career that spans over five decades.  He is the only person in history to be a member of three distinct hall of fame organizations-- Gospel Music Hall of Fame, Kentucky Music Hall of Fame and the Amateur Radio Hall of Fame.  He was twice inducted into the Gospel Music Hall of Fame, both as a solo artist and as part of the Gaither Vocal Band.

Larnelle has garnered numerous accolades for his music including five Grammy Awards, eleven Dove Awards (three of which were for Male Vocalist of the Year), and a Stellar Award for Best Solo Performance, among many other musical honors. Larnelle was recently recognized by his home state of Kentucky with the Governor’s Award for Lifetime Achievement in the Arts, making him the first Christian artist to receive the award. He has achieved nineteen #1 radio singles and countless top 10 hits.  Songs such as "How Excellent Is Thy Name," "I Miss My Time With You," "I've Just Seen Jesus," plus many others, including his signature song, "Amen," are now considered modern gospel music classics.

From the White House to the danger zone of the 38th Parallel, Larnelle has impacted audiences across the globe with his music.  He was the first Christian artist to perform inside the Kremlin after the fall of the Soviet Union.  He is one of a handful of celebrities to receive the Ad Council's Silver Bell Award for Distinguished Public Service in recognition of his song "Mighty Spirit" as the theme song for the longest-running Public Service Announcement in television history.

Married to wife Cynthia (a.k.a. Mitzy) for over 44 years, Larnelle has successfully combined the demanding lifestyle of a global music career with being a husband, father, and grandfather.  Still a sought-after vocalist for tours, special events and ceremonies, Larnelle continues to perform solo concerts for churches and various organizations worldwide each year.  He recently performed for the National Day of Prayer event in Washington D.C., at New York City’s famed Carnegie Hall, and sang for a gathering of U.N. Ambassadors in our nation’s capitol.

"In one of the truly singular careers of contemporary Christian music, spanning nearly two decades, Harris has accomplished the rare feat of establishing a strong, indelible identity, while also proving adept at changing with the times...he continues to amaze...one of Christian music's true treasures."  -- Billboard Magazine

“…his majestic tenor, resplendent in its power and resonant in its soulfulness, soars with the greatest voices in Christian music history…” --CCM Magazine

"...his voice is still as strong and his message as relevant as ever." -- Christian Retailing Magazine

“…his message and passion for ministry have grown in intensity and relevance…it’s no wonder Larnelle’s songs and ministry have stood the test of time.” --Church Libraries magazine