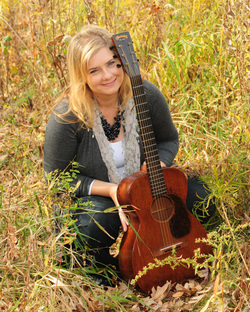 Lisa Weyerhaeuser (pronounced “Warehouser”) wears a plethora of hats.  She is a songwriter; singer; worship leader; a licensed counselor; a Professor of Adolescent Psychology with Master Degrees in both Religion and Counseling Psychology; a mother of three boys; and a pastor’s wife.  She has released several solo albums. including a recent children’s album under her “summer camp” moniker, La-La Lisa.  But a few years ago, when one of her musical mentors passed away, Lisa began a quest to honor his memory.  What resulted is the project, Caught in Time and Space, a tribute to the legendary Larry Norman.

“Larry is one of the greatest influences in my musical life,” says Lisa.  “When he went home to be with Jesus in February 2008, it affected me deeply. Because of the musical journey we had been on together over the years and because of our friendship, friends and fans reached out to me after his passing as a way I think of trying to connect with someone who made such an impact in their lives. People kept asking me about the record that he produced for me back in the 80's. I only had copies on cassette, so after some prompting, I decided to re-release the project that he and I had worked on so many years ago. On my current tour, I am singing some songs from this project as well as many favorites written by Larry. Larry's music is as influential today as it was when he wrote it, and if I can even in a small way extend the ministry of his music, I would want to honor him by doing just that.”

Along with the original Norman-produced songs, Caught in Time and Space also includes acoustic tracks of each of the original tunes as well as additional recordings that have never been released. Larry’s brother, Charles Normal, arranged several tracks on the album, and heads up the U.S. division of Solid Rock Records, founded by Larry. One of the unreleased gems is a duet of Larry’s song “Sweet Sweet Song of Salvation,” which was recorded during a tour Lisa and Larry did together in Indiana. Another track features a guest vocal from Larry on the song, “Politically Correct,” which was recorded in Max Hsu’s (Superchick) studio. A different version of “Politically Correct” was used on Lisa’s solo album, Life on Earth, which was reviewed by Larry in CCM Magazine, stating that, “Lisa's music simply declares the things that are good and pure and true... a place where I wish all contemporary music would reside.” Caught in Time and Space also features a duet rendition of Norman’s classic “Great American Novel” and Lisa gives her fresh take to “U.F.O.”  The recording experience has been both solemn and joyous for Lisa.

“The songs that mean the most to me on this project are the songs Larry and I sing together,” says Lisa. “When I went back into the studio to re-mix the project, it was so amazing just to hear his voice again. It brought back the memories of recording together and memories around that time of life. He was an honest, down-to-earth person and a true friend, and I still miss him.”

Caught in Time and Space has already spawned an overseas tour to the United Kingdom in October that will include stops in Cambridge, Liverpool, Wigtown, Motherwell, Hartlepool, and Leeds.  Plans are also in the works to tour select cities in the U.S. as well. Lisa hopes all of these efforts help honor her friend, but more importantly, give a new generation a chance to hear some timeless, meaningful music.

“One of my last memories of Larry is when he and I stopped to see a friend of his who owned a record shop in Oregon,” Lisa recalls. “That night, this friend began his personal walk with Jesus. I still stop by that record shop to see my friend when I go back to visit.  Larry’s music was just an extension of who Larry was – and he loved to see people come to Jesus.  I hope this project will capture his essence and give a new generation an opportunity to enjoy his music.”