"...this gifted veteran still brings a measure of skill and eclecticism to his thoughtful albums that's not heard nearly enough in Christian music." -- ChristianMusicToday.com 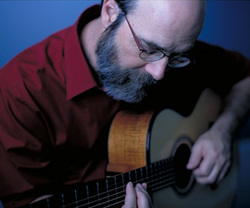 The first few words heard on Michael Card’s new CD, THE HIDDEN FACE OF GOD, extend an invitation to a very specific group of listeners– “If you are wounded…”  Because after 25 years of composing and singing legendary songs, writing award-winning books, hosting his own radio talk shows, and ministering in churches worldwide,  Michael believes he has finally recognized what is lacking in the life of the average Christian today – lamenting.

“Our theology tells us that if we complain to God, we’re being disrespectful,” says Michael.  “But at least 80 of the Psalms are actually Laments. It has become a lost language to our culture, yet almost every major Biblical character recorded a lament.  There must be a reason for that.”

So what is lamenting? Webster says to lament is to “mourn aloud; to express sorrow or regret; cry out in grief; complain.”  Michael says lamenting is ultimately a place of pure worship.

In THE HIDDEN FACE OF GOD, Michael discovers that place of praise and worship through tearful, sometimes tragic, lyrics.  “Every lament in the Bible, with the exception of Psalm 88, ends in praise,” Michael continues.  “The answer to all our laments is seeing the face of God.  Job wasn’t going to stop complaining until God came down and spoke to him.  And when God finally did that – even though He didn’t bother to explain to Job why his sufferings were taking place – His presence was enough to make Job’s questions go away.”

The song “Come Lift Up Your Sorrows” brings another Old Testament truth to life.  “I have discovered that true worship involves a wilderness experience,” says Michael.  “God told Pharaoh, ‘Let my people go so they may worship Me in the wilderness.’  We need to get over our misunderstanding that if we grumble to God we are somehow dishonoring Him.  God doesn’t wilt from our complaints.  In fact He says, ‘Bring it on.’  What He desires from all of us is complete honesty and truth.  And sometimes, the truth is we are disappointed with God.”

Michael’s personal laments have come about in the midst of tremendous grief.  He comforted his sister when she lost two young children, and then years later, watched while his 18-year old nephew died of cancer.  During these intense times of sorrow, Michael found that “normal” worship was not working.

“I felt that my own experiences of praise and worship had become anemic.  I would be in a corporate worship setting where people were going to places I couldn’t go.  I felt like the only things I had to offer were confusion and pain.  But then I realized, if that is all I had, I needed to share it with God anyway.  He wants all of us – even if all we have to offer Him is our doubt and uncertainty.”

With his signature vocals and his smooth acoustic arrangements highlighted with an occasional banjo riff or violin interlude, Michael offers his own array of musical laments in THE HIDDEN FACE OF GOD.  On the Negro Spiritual, “Walk With Me Lord,” Michael quietly plays banjo while turning the vocals over to his pastor friend, Reverend Denny Denson.  In addition to the seven of the CD’s eleven songs written or co-written by Michael, he also gives a stirring performance on the classic hymn, “O Sacred Head.”

With “Older Than The Rain” Michael notes that human tears watered the earth long before falling rain, and on the powerful “To A Broken God,” Michael admits,
“I was unaware how it is with a broken God
I thought of You as above my pain
Lost in my despair, so it is with a broken heart
I never dreamed You could feel the same.”

Not just a musical journey for Michael, The Hidden Face of God will also become a devotional book that will be released in early 2007 and will complement A Sacred Sorrow (Navpress, 2005).  Presently, Michael is preparing church services that focus on reacquainting people with the process of lamenting --bringing suffering and confusion before God.  And Michael readily admits that it takes real courage to be that honest with God.

“Two of the most impassioned laments in the Bible are answered ‘No’ by God – Jesus in the garden asking that the cup of sacrifice be passed from Him, and Paul asking for removal of his ‘thorn.’  We have to realize God is not a big Santa Claus in the sky.  What He wants from us is a relationship.  And sometimes, even in the best of relationships, we feel disappointment, anger, even hatred.  David hated Saul, but when Saul finally died, David wept for him.  Why would he do that? Because David had offered even his hatred of Saul up to God.

“At the end of Psalm 51, when David has poured out his heart to God, recognizing his terrible sin, David writes: ‘The sacrifices of God are a broken spirit, a broken and contrite heart.’  What David learned in that lament was that all he had left to give was all God wanted in the first place.”

So after filling both a Cd and a book with deep-rooted questions and mournful cries, has lamenting brought answers to Michael Card’s most personal questions about God?

"We think we need answers from God for life’s struggles,” says Michael.  “But in actuality, we just need Him.  The answer is His presence.  God moved off the throne to meet Job face to face, just like Jesus left heaven and came here to feel our pain.  He was a ‘man of sorrows, acquainted with grief.’  Like Job, our theology will fail us in times of intense sadness.  But the presence of God, made plain to us through Jesus, is exactly what we need in the midst of our suffering.  He is the only One who truly understands how cruel life on earth can be."