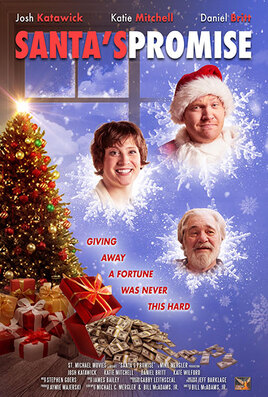 ​For Immediate Release (Cincinnati, OH) — St. Michael Movies has announced it will release its seventh film, a Christmas comedy entitled Santa’s Promise, on December 1st. Directed by Bill McAdams, Jr. — whose resume includes films such as Good Will Hunting, Captain America, and the Avengers films — Santa’s Promise is a romantic comedy about an ex-con, Nicholas Hollyhock, whose dying uncle, Cosmo Lambini, asks Nick to give away his fortune in order to save his soul. Nick thinks this will be an easy task, but it proves harder than he thought, especially when his estranged twin brother Lance wants the inheritance all to himself. St. Michael Movies’ founder Mike Mergler co-wrote the script and says this is not your typical Christmas movie.

“This movie is a comedy with an unorthodox premise,” says Mergler, “but ultimately the story steers the audience to a spiritual rather than worldly understanding of the real meaning of Christmas.”

Santa’s Promise will be available on In Demand, Dish, Amazon Prime Video, Fandango Now, Google Play, Vudu, among other streaming platforms. Mergler says he hopes people enjoy the film but also receive an important message from it.
​
“This movie reflects an important principle from the Gospel story,” says Mergler. “Though we have an earthly family to care for, our faith family is where we work out our salvation by doing the will of our Father in heaven.”

​Based in Cincinnati, Ohio, St. Michael Movies has produced seven feature-length films which have garnered 20 awards from various film festivals across the country. Founder Mike Mergler was a successful rock concert promoter early in his career, and later traveled on the road with the legendary comedian Red Skelton. Mergler started St. Michael Movies in 2011 with the purpose of creating faith-based movies that entertain and inform. Visit http://www.stmichaelmovies.com.