“RED should open up Rhema Soul to a whole new crowd of listeners, while cementing them as one of the top hip hop groups…it’s that good.” – New Release Tuesday

“…Professing positive messages through a musical landscape of rap, dance electronica, and soul…it's overall as worthy of the mainstream attention common to their Christian hip-hop peers.” – Christianity Today

"RED is a stellar piece of art, which combines the group’s growth spiritually and musically to produce an album which is easily one of the best sounds in Christian hip-hop.”--The Christian Manifesto

“Red offers a wide range of genres, variety, and diversity speaking on everything from perspective to growth through struggle.”--NewH20

“Rhema Soul’s Red manages to blend hip-hop music along with other musical elements with the end result being some very well done music with lyrics that offer up both entertainment and spiritual wisdom.”--C.W.’s Place

“You know it’s an awesome CD, when you have a hard time choosing your favorites from its list of songs…the lyrics are genius…” --CMAddict 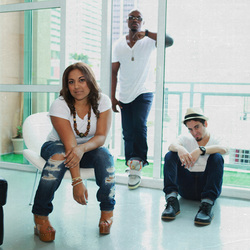 Ask the hip-hop group Rhema Soul why they titled their fourth album, RED, and you’ll get adjectives that reflect the distinct personality of the group itself.  “The color red is an attention-grabber,” says Butta.  “It communicates urgency,” says K-Nuff.  “Red speaks of passion,” juanlove concludes.

Based out of South Florida, this trio has been passionate, urgent, and grabbing attention for several years as one of the freshest new hip-hop groups.  Rhema Soul’s first recording in 2007, Worn Soles, featured the successful radio single “All You Are” with Hillsong United.  Their follow-up project the next year, Dope Beats, Good News, included the innovative song “Steez” which was nominated as a favorite video by the Gospel Music Channel.  And 2010’s, Fingerprints , offered up more personal songs from the group, including the provocative song “Fly Away.”  The group opened up painful moments in their individual lives in an emotional music video of the tune, where K-Nuff describes his parent’s difficult marriage; juanlove makes a statement about teenage sex; and Butta reveals the sexual abuse she suffered as a child.

But with Red, Rhema Soul takes an even greater risk, musically speaking.  Produced by Andy Anderson (TobyMac, Group One Crew), Rey King and A.D., the new project marks a significant growth in musical style while retaining the authenticity of the group’s fervent focus.  Red’s first radio single, “No Walking Away,” speaks resolutely about the importance of commitment.

“Whatever you believe in, you should be willing to fight for,” says Butta, the group’s female vocalist. “Whether it is marriage or your faith, when you commit to something, you should do everything in your power to stick with it.  When you hold on to your goals and your dreams, you will find victory.”

“So Beautiful,” produced by Rey King, features a solo from Butta and speaks of her desire to see young women healed and whole.  “I have a heavy desire to tell young girls how significant they are in God’s eyes and help them build their self-esteem,” Butta explains. “Young women need to learn how to guard their hearts and to allow God to show them what love truly is.”

The song "Need an Answer" talks about the need for people to ask meaningful questions. “Sometimes life throws us things that we simply don't know how to deal with,” says juanlove. “We wanted to give a voice to the multitude of emotions that people feel when they are looking for direction.”

The trio all came from youth and worship leader backgrounds, as well as strong ties to missionary work. They traveled with the organization, One Hope (Onehope.net), for nearly two years, ministering to needy children in South Africa, Russia, Eastern Europe, and the United Kingdom.  Rhema Soul has also been involved with Hope in Motion, founded by KJ52’s drummer Pedro LaTorre.  The Hope In Motion team visits public and private schools with a dynamic presentation of music and dance, opening doors to help counsel students who are suicidal, depressed, or have been bullied.

From worship to hip hop, the seasoned Rhema Soul has carved a unique path entirely their own, one which is sure to cater to mass audiences of all backgrounds and musical preferences. Ultimately, the heartbeat of Rhema Soul is ministry, communicating a message of love and hope, through the medium of song. “It’s more than music for us,” says Butta. “It’s a movement.”