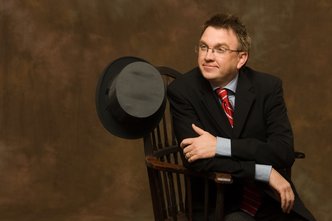 Q: As someone who has been performing in public schools for over two decades, what changes have you seen take place in children in attitude, character or other traits?
A: I don't know that there has been a dramatic change in elementary age children—as far as their response to my shows.  Kids love to laugh.  Some parents like to laugh—but many have forgotten how.  Since the beginning of my school events, creating a connection between parents and kids has been a huge joy for me.  Many parents don't see their children "belly laugh" very often—except for the occasional TV show or movie. Children are (mostly) honest and loving.  Since the start of my career performing for families, I have seen children with hard hearts.  Many times, I've seen those hearts melt through the fun and laughter.  Since the beginning, I've been honored to take on a sort of "crazy uncle" role.  Unfortunately, many kids don't see their dad in a loving, fun, role.  It seems sometimes when a man becomes a father his psyche changes—and now as provider—he is scared just to be himself with his children.  It may be difficult for some men to be a bit vulnerable, open and honest.  As a father myself, I have to remind myself often just how much my kids adore me, and my role in guiding, nurturing and directing them is vastly important.

So, perhaps, it's not so much the children that have changed in the last 25 years as it is the parents.  We expose those little ears to so many things that are not honoring, uplifting, and protective. As a society, there are very little "norms" anymore.  We are so "non-judgmental" that we are afraid to make hard choices, to lead by example, and to stand up for the innocence of a child.  As parents, it is our job to protect them from thoughts, ideas, and words that used to be reserved for adulthood only.

Q: What is it about magic that continues to entertain children and adults?
A: The mystery of wonder never gets old. The world today is literally at our fingertips.  We can get information on just about anything, in seconds.  To experience something that seems "impossible" is a wonder that most folks truly love.  I engage people's thoughts, sights, and even sounds to create a memorable experience.  My events are full of laughs, too.  I think humor is an incredible way to connect with the hearts of people.

Q: Talk about two of your most memorable moments as a performer.
A: There are hundreds. No two shows are ever exactly alike!  However, some are definitely more memorable!  Once, I was sharing wonder with children at Vanderbilt Children's Hospital and there was a mom taking pictures of the children laughing during the show.  She took a picture of a little boy—who you could see smiling under his mask, as he was helping me with a sleight of hand trick.  She printed the picture in black and white—then hand painted in color the boy and me. Under the photo she titled it: "Joy Comes in the Morning."  She sent this to me as a gift.  It is one of my favorite possessions.

The first time I traveled overseas to Antalya, Turkey, I discovered the sameness of humanity.  After my show for English-speaking missionaries, I was sightseeing.  Outside the ancient coliseum, I met two middle-aged women selling their wares.  They spoke no English—and I didn't speak their language.  But, as I showed them a simple trick, they reacted with amazement!  I understood at that moment how laughter, amazement, and wonder truly transcend cultures, languages and religious barriers.

Q: You talk about having a cleft lip and palate as a child. Share what you learned about overcoming difficulties early in your life.
A: Being born with a "birth defect" and a speech impediment was something that I probably didn't truly grasp until I was in middle school. Even though I spent years in speech class, orthodontist visits, and six surgeries—five before I was twelve—I don't think I ever really thought about being different until I was about thirteen. My two older sisters, my mom and dad treated me as "normal" as they could.  I certainly learned that it's not what happens to you—but what you do about it—that makes all the difference.  I also learned from a young age the truth of 1 Samuel 16—that God looks at the heart.  I can't recall ever once, feeling "sorry" for myself.  Discouraged? Yes. Frustrated? Of course.  But my mom and dad challenged me to "Seek His Kingdom, first." (Matthew 6:33). I knew from a young age that God, did indeed, have plans for me. I also was very aware that others had many more challenging life situations than I did. That realization has always helped me to keep everything in perspective.

Q: What advice do you have for kids who may be struggling with being different?
A: First, we are all "different" every one of us.  Even identical twins are not the same person!  God created you to be you, even with your difficulties and challenges. When I was a kid, because of my facial surgeries, I was aware of those around me who also had physical or emotional challenges.  I had a natural empathy towards them.  I remember in high school one of my good friends was deaf.  It was a challenge for him of course, but it's not what happens to you—but how you choose to use it! Embrace your challenges. I remember the surgeon telling my mom when I was about eight-years-old, "Mrs. Humston, cleft-palate children are either an extreme success or become very reclusive as adults."  You see, the face is the first thing we notice when we see someone.  Hearing him tell my mother that, I knew I wanted to be a "success."  It was a few years later when I discovered that to truly be a success, I had to practice Matthew 6:33. "Seek His kingdom first and his righteousness and all these things will be given to you."  So, whether or not you have a "defect," a physical challenge, or some other problem (and we all have problems) you need to focus on Christ's love for you and others.  Don't listen to the accuser's voice. Let God have your best through Christ in your life.

Q: How has magic intersected with your Christian faith?
A: The first real "magician" I ever saw was in church!  Reverend Clyde Sarrott was a pastor and evangelist.  My father had him come to our church when I was a boy.  I remember him doing magic tricks.  Eventually, he taught me a couple and gave me some simple props.  Since I was a small child—and had multiple surgeries on my face—playing sports was out of the question.  I tell people "I had a sports bypass" when I was a child.  But, these tricks?  I could do that! My first "shows" were for church folks. I knew, by a very young age, that I wanted to be a magician.  But, I also knew that having a speech impediment would be an issue.  I remember praying and promising God that if He would allow me to become a magician that I would glorify His Kingdom through it all.  So, my faith and my calling are intertwined. God has been so good! He led me from just "performing" tricks to be able to proclaim the Good News!  Jesus himself taught through parables and stories. People were moved because they could see themselves in the stories He shared.  When you can share something that makes people sit up and take notice—and motivates a change in their thinking, attitudes, and heart—that's truly beautiful! 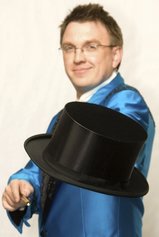 About Scott Humston:
Overcoming a speech related birth defect to become a full-time speaker and performer, Scott Humston now devotes his life to the art of educating through entertainment. He holds a B.A. in Communication Studies and Dramatic Arts from Trevecca Nazarene University, and has been awarded professional and community awards for his encouragement to young people.

Over the last two decades, Humston’s magic has been seen live by over 3 million people. His show “Pro Kids” has been presented in public and private schools across the nation.  He has performed for major corporations such as Southwest Airlines and Warner Brothers Records, as well as three performances at the White House.  Humston’s magic was featured on the #1 hit television show, “Now You See It,” on the BBC channel in the United Kingdom.

Humston travels more than 40,000 miles a year. When not on the road, Humston and his family live in Grand Island, Florida. He’s been married over 20 years and has four home-schooled children.