Shannon Wexelberg
I Have a Song 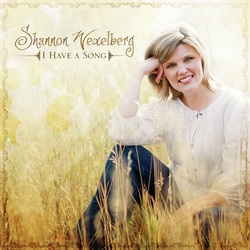 Listening to the worshipful strains of Shannon Wexelberg’s new CD entitled I Have a Song (Discovery House Music), one would be hard-pressed to envision all that has transpired over the past twelve months of Shannon’s life.  And she is the first to admit that there were moments when she personally identified with one of most perplexed and troubled prophets in the Bible.   “The title song was actually inspired by Habakkuk 3:17-18,” says Shannon.  “I have an idea of how Habakkuk felt during those verses.  Less than a year ago, our lives were in utter turmoil --from jobs, to where we were going to live, to the direction of our future.  In the natural I had every reason to be sad, disappointed, frustrated and discouraged.”

Shannon and her husband Mark thought they had finally come to the end of the most difficult trials in their lives.  After many years of infertility and desperately wanting to be parents, the Wexelbergs adopted their son Christian in 2005.  Their family finally felt complete and the couple began a new season in their lives as the parents of an active little boy.  Then, in March of last year, Mark was out for a Sunday motorcycle ride when a girl in a truck ran a stop sign and collided head-on with Mark’s bike.  The impact broke 23 bones in his body and required three surgeries to place metal rods, screws and plates in his femurs, pelvis, ankle and knee –procedures that literally put him back together again.  While the doctors have been encouraged by his year-long progress, Mark still has a long way to go in the healing process.   And even though nearly everything in their lives has been in a constant state of flux, Shannon found herself in a place, spiritually, where she had never been before.

“It’s hard to explain,” she says, “but somehow the Lord helped me fix my eyes on Him even through the most difficult moments. I realized that even in the midst of this long litany of issues, I still had this joy bubbling up from inside of me.  I still had a song and it was really amazing.”

I Have a Song, Shannon’s fourth solo project, has the feel of a live worship service being conducted in Shannon’s own living room.  Shannon’s emotive vocals soar through nine of her new, self-penned songs, intertwining perfectly with well-known hymns like “’Tis So Sweet to Trust in Jesus” and “Praise to the Lord the Almighty.” From her poignant interpretation of Psalm 23 to songs that reflect personal spiritual lessons from Shannon’s life, I Have A Song  is a very intimate, honest and transformative project.

The song “Boundless” came directly from an episode in Shannon’s life that challenged her understanding of what forgiveness truly looks like.  “I walked through a very painful season in a very dear relationship,” recalls Shannon. “The Lord was so gracious to us both, and eventually brought healing to the situation and to our hearts. But one night after our friendship had been restored, I was home flipping through my journal.  I realized I had recorded some of my angry thoughts upon the pages.  I heard the Lord whisper, ‘Tear those pages out.’  I had never torn out pages from my journal before so I ignored the prompting. Again, I sensed the Lord saying, ‘Tear those pages out.  Love keeps no record of wrong.  Tear them out and throw them away.’  This time, I obeyed. When I started ripping out those pages, something happened in my heart. It was as if I suddenly had a deeper awareness of how God’s boundless love rips out the pages of our sins and offenses against Him, never to be remembered again.”

A couple of years ago, Shannon began to minister to inmates in a maximum security facility and the experience opened her eyes to another aspect of her own spiritual walk which she reveals in the song “Becoming.”   “The passion that genuine believers who are behind bars have for the Lord often puts me to shame.   I don't always view the world through the eyes of Christ as I should, and I want that to change.  I can get way too caught up in own my little world and I want to become more ‘others’-focused.  The inmates have taught me that there is no hole so dark that God cannot reach down, find you and pluck you out.  His love is deep, wide and amazing and I've seen that evidence behind those prison walls.”

From the powerful declarations of “How Holy” and “Jehovah Shalom” to the introspective words of “Cling” and “Nothing Can Separate Us,” Shannon shows she still possesses the masterful art of songwriting which has garnered her numerous top 10 national radio singles.  In addition to her solo projects, Shannon has joined forces with other ministries and organizations including the Brooklyn Tabernacle Choir, Scott Krippayne, Paul Baloche, Ross Parsley, Kim Hill, Maranatha! Music, Integrity Music, The Desperation Band, LifeWay Worship, and PBS, among many others.  But Shannon hopes that I Have a Song will resonate with a whole new audience looking for praise & worship songs that carry them to new level of intimacy with God.

“More than anything, I want people to find the Lord...to be stilled by Him and to be stirred by Him,” says Shannon.  “This recording reflects a very specific chapter in my life where I was struggling myself to find Him in the midst of bleak circumstances.  And I hope it will minister to others who are going through similar situations in life.”  “I Have a Song contains some congregational songs, but it also offers songs of ministry that one might sing over someone else.  In both cases, it is my hope that each song of worship would take the listener from one place to another, focusing in on who God is, giving them a place of peace and assurance in the midst of life’s tribulations.  The more we can be reminded of who He is, the more we will be changed, renewed and encouraged in His presence.”