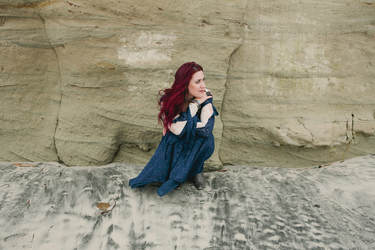 Q:   Talk about your new EP and how it differs from your other projects.
A: Adoration Project is our third release. Musically, I would describe it as part Americana, part singer/songwriter, borderline country, with a bit of world beat. Each song is a unique musical experience. The project is definitely a departure from our earlier material, which was a heavier, harder rock sound. You write songs differently when you are by yourself versus with a whole band. But all these songs on this recording are my babies— lyrics and melody— and they speak more directly about faith and spirituality. The album is a bit of a passion project, but also a deep reflection of the last couple years and some of the experiences that I have gone through.

Q: Talk about the inspiration behind each song.
A:  Some were poems written from a place of seeking, or a prayer, and some were written out of a deep questioning about life and circumstance.  The underlying inspiration behind most of the songs that I write is my faith and how that expression is played out in my life.  “Desperate for Love,” for example was written after the Boston bombing and was a heart's cry of "why" and how numb we can become when we see so much violence, and where God is in all of this. “American Prayer” was actually inspired by and written for a dear friend. Songs like “Free Again” and “Turning Point” were written years ago and existed as scratch tracks in our home studio for a long time. But we knew one day there would be a place for them to be developed and released.

Q: Why did you decide to change your musical style for this EP?
A:  I think I wanted to go in a bit of a different direction personally. For one thing, I wanted these songs to be easier on my voice! But seriously, I wanted to express the songs that were in my heart, and they didn't have the same vibe as the tunes that were written when we had the rock band.  I'm not saying that we would never return to a more aggressive sound, my heart just isn't in that place right now. 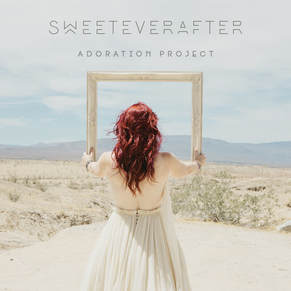 Q: Which song is your favorite on the new EP and why?
A: That’s like picking which child is your favorite! There are two that stand out to me. “Open Me,” the title track and “Turning Point.” With “Open Me,” my very first recording of that song was just my voice and a synthesizer pad. We gave that to our drummer, who has a decidedly world beat influence and he just turned it into something amazing in the studio, which just blew my mind. I love that song because it shows what kind of synergy can happen when you have multiple people working on something together. “Turning Point” is just special to me purely because of the subject matter. I had originally written it as a spoken word that we read one Easter at church. And afterwards, I just wanted to challenge myself to put those words to a melody. I think it turned out so sweetly, and all the musicians who played on it took such care in their parts. It still makes me cry when I listen to it.

Q: What you think churches do right and do wrong when it comes to praise and worship?
A:  Oh, wow, that's a loaded question! I think that we get it right when we seek Him first. I think that when we are careful to balance theology with worship music, then we are serving our church families well.  I think that when we idolize, or place anyone (pastors, music leaders, elders) on a pedestal, we miss the boat. When it come to praise and worship music it's not about hit songs, it’s about pointing people towards God and showing them Jesus.  It's not about playing a song exactly as it sounds on a CD, it's about connecting with it first and then allowing your congregation to connect with the heart of God. I heard a great quote once in respect to worship— it's all about revelation and response. Our responsibility as worship leaders is to reveal the character of Christ and our Heavenly Father, and worship is our response to that. Whether that comes out in the form of a song, in our giving, or in serving others— if it comes from the heart, that's what the Lord seeks.  I think if you are encouraging that kind of worship in your church you are doing something right.

Q: Share a bit about your testimony.
A: I was an only child of a single mother in Canada for the first 13 years of my life. I grew up never knowing my biological dad, or any father figure. My mother did attempt to show me who God was, but I really didn't want anything to do with Christianity. When I was 16, I ended up dating a Christian who spoke with me at length about God and spiritual things. After one particularly intense discussion, my soul was confronted by the truth of Jesus, heaven, angels and demons. I realized that I truly believed these things existed, and if I believed these things, then I had to believe the whole truth. I prayed for Jesus to come into my heart that night, by candlelight in my bedroom. I didn't even tell my boyfriend that I had accepted Christ until weeks later, because I didn't think it was such a big deal.  But that was a turning point in my young life and though I didn't feel any different right away, the Lord began to change my heart and my life from the inside out. Because of the lack of a father figure, and questionable men in my mother's life up to that point, the aspect of a 'Heavenly Father' really struck a chord and I have spent the majority of my adult life allowing God to "father me" and show me what having a father is really like.

While in college, I met Jay at a popular club downtown. He was the guitarist in the band and I was in the audience, and right from the beginning we shared our love of music and faith in Christ. We got married a couple of years later and began to play and write music together. We started SWEETEVERAFTER and moved down to San Diego from Canada in late 2007 to pursue music and ministry stateside.

My life took a very interesting turn about seven years ago when I was "found" by my biological father and his family.  That "finding" didn't pan out and I, again, found myself working through the complicated issues of abandonment, heartache and forgiveness in my life towards my dad.  Believe me, there is a whole other album of songs that have been written, I'm just not ready to share those yet.

Q: What do you hope listeners will gain from these songs?
A:  Of course, as an artist, you hope that people will connect with your work and fall in love with it as you have. Sometimes they do; sometimes they don't.  I hope that these songs resonate in peoples’ hearts, and that they shine a light on our faith and our purpose here in this world. Ultimately, I hope the songs bring listeners closer to their Creator. Many of these songs were written from very personal places in my life, and my faith in God and who He is really helped me to reconcile a lot of things. I hope that these songs help people to see Him more clearly in their own lives. 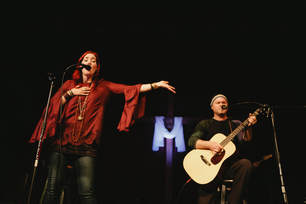 Founded in 2009 and fronted by the voice of Ammee Pearl and the guitar artistry of her husband of 17 years, Jay Huzil, SWEETEVERAFTER has earned a solid reputation as a mix of “heavy-edged rock with an acoustic aftertaste”. Their debut album, My Death, achieved stellar reviews and a nomination for Metal Song of the year in the Hollywood Music in Media Awards for their single "Find Myself." Their second album, Acoustic Aftertaste, honored the essence and the origins of the music, with a live, intimate and “unplugged” recording of songs from the first album. Pearl is currently worship leader for Grace Vineyard Church in Oceanside, California. For more information, visit www.sweeteverafter.net.