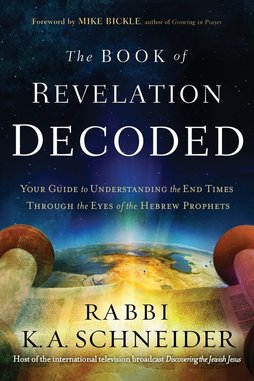 According to a Barna Group poll, 41 percent of Americans age eighteen and over agreed with the statement that “the world is currently living in the ‘end times’ as described by prophesies in the Bible.” Yet the Book of Revelation remains a mystery to most people, even to scholars. With his new book, The Book of Revelation Decoded: Your Guide to Understanding the End Times Through the Eyes of the Hebrew Prophets, Rabbi K.A. Schneider offers every Christian the opportunity to discern and comprehend one of the most misunderstood books of the Bible.

Releasing March 7, 2017, from Charisma House, The Book of Revelation Decoded compares the teachings of the Torah and the Hebrew prophets with Revelation, and offers new insights into much-debated issues such as:
“I believe by simply examining Revelation with Scripture itself—by using the lens of the Hebrew prophets—we can understand God’s ultimate purpose for this crucial book,” says Schneider, host of the international television broadcast Discovering the Jewish Jesus, which airs in over 100 million households.

“This book will reveal that what we are experiencing today is not a pendulum effect,” Schneider continues. “Immorality will not correct itself. Sin won’t suddenly change its course. Nothing will happen that can reverse this progression of evil compounding evil. Jesus Himself warned of this. We are entering into the most difficult days in human history, and my prayer is that this book will offer hope, expectation, and understanding so we can face whatever comes.” 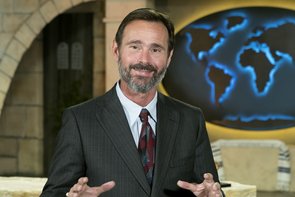 About Rabbi K.A. Schneider
Messianic Rabbi K.A. Schneider is the host of the international television broadcast Discovering the Jewish Jesus, which can be seen seven days a week and airs in more than 100 million homes in the United States and approximately 200 nations worldwide. In addition to hosting mass evangelistic crusades around the world, Rabbi Schneider currently leads the congregation Lion of Judah World Outreach Center in Toledo, Ohio. He is the author of three other books, Awakening to Messiah, Self-Deliverance, and Do Not Be Afraid!