Q&A with Larry Crabb
Author of “Waiting for Heaven: Freedom from the Incurable Addiction to Self” 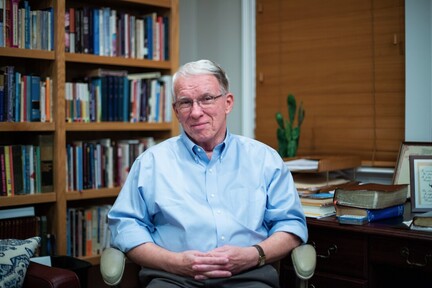 Q: What motivated you to write your new book, “Waiting for Heaven?”
A: Watching the news, reading the newspaper, and talking with people, seeing the struggles in my life and in others, made me more deeply aware that if there is no heaven worth waiting for, I really can’t see that there’s much to Christianity.  God tells us to endure tough times and persevere through them, but toward what?  Is life little more than an endurance contest? Jesus told us to expect trials and sorrow in this world, and only when He returns to make everything new will we live with no tears or pain, only indescribable joy.
Very few sermons in today’s Christian culture focus on the radical hope of heaven and the value of waiting for it now.  Most Christian teaching seems to provide biblical principles that if followed will make our lives work as we want them to.  But the Bible offers no guarantees that things always work that way.  And even when things do go well, our addiction to self, to thinking things should work out well for us, remains unchanged.  It became clear to me that demanding nothing now frees us from the futility of making life work to our satisfaction, thus freeing us to love God and others, knowing every desire will one eternal day be satisfied.

Q: You identify “relational sin” in the book and say it has become an epidemic. What is that exactly?
A: The obvious finally occurred to me long after I finished doctoral training in clinical psychology.  During those five years, I was taught that our personal problems, psychological/emotional disorders were the product either of past trauma or poorly wired brains.  But if people really do bear the image of God, and if God literally is a three-person relational community where all three get along really well, it began to make sense to me that what’s really wrong with us is a flaw in our relational make-up.  Unlike God, we’re all out for ourselves.  Self-centeredness is somehow embedded in human nature.  And the idea of relational sin became clear to me.  Relational sin is looking out for me and using you to make me feel good about me. It spoils marriages and reduces friendships to little more than mutual manipulation. It is an epidemic for one reason: we have all walked away from God and have made idols out of each other. We now give to get, and that’s not love.  It’s the universal addiction to self. 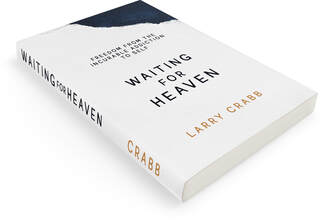 Q: You talk about people being “self-addicted” and mention the Apostle Paul as an example. Was Paul self-addicted?
A: Yes, he was. So was Peter, John, St. Augustine, Mother Teresa, and Billy Graham.  The apostle John wrote that anyone who claims to have no sin is blind.  Paul never made that claim.  Read Romans 7 where Paul says, as a maturing Christian, “I hate what I do, but I still do it.”   It was because of his close relationship with Jesus, whose love led Him to die for Paul’s self-centeredness, that Paul could see how unlike Jesus he truly was.  It was Paul’s awareness of relational sin – things like impatience, irritability, and pride – that freed him to repent whenever he recognized his sin and to experience powerful transformation into a man willing to suffer for the sake of Jesus and to become the great apostle. But even at his most mature, Paul had some distance to go in becoming like Jesus. He was self-addicted, but he struggled so deeply and waited so eagerly for heaven that he became meaningfully, though never completely, free of his addiction to self.  Only heaven provides the complete cure.

Q: You say Christians should be actively waiting for heaven. What does that look like?
A: We’ve all heard the tired cliché that it’s possible to be so heavenly-minded that we’re no earthly good.  Anyone who simply waits for heaven’s satisfaction with no real thought of becoming less self-centered or better at loving others and doing good in this world is passively waiting.  Active waiting for heaven’s delights frees us to pursue Christian maturity. By actively waiting for heaven, we can learn to identify and repent of our selfishness and become willing to pay whatever price is required now to love God and others well, until loving well becomes natural to us when we see Jesus.

Q: You talk about an “exact center” of the Gospel that can help us with self-control. Talk about that.
A: it’s too easy for Christians like me to think– hey, I’m forgiven, I’m into spiritual formation, I want to put Jesus on display by how I relate, so I guess I’m living everything that Christianity offers.  I wonder how many Christians are prematurely content, unaware of the exact center of Christianity that deeply touches our thirsty souls.  Every person who bears the image of our three-person relational God passionately wants to be in a relationship where we’re fully seen, fully known, and fully valued and loved.  If I’m reading John 17 properly, where Jesus is talking to His Father within hours of getting nailed to a cross, I hear Him praying that everyone who comes to Jesus for forgiveness will then know they are loved by God the Father with the exact same love the Father has for His Son.  That kind of love is available nowhere else.  It’s really a staggering miracle.  The Father sees His sinless perfect Son and values and loves Him with perfect love. Then He sees me —sees my failures, grumpiness, and selfishness, fully knows even my thoughts that are so full of pride and insecurity — and values me and loves me as His son (small s), the same way He values and loves His Son (capital S).  That miracle is the exact center of Christianity, and it is the ultimate satisfaction of our deepest desires.
​
Q: You describe an “exciting Christianity” that believers should stop following. What does that look like?
A: Exciting Christianity, especially in today’s give-me-satisfaction-now culture, keeps Christians aware only of their shallow thirst.  We want to feel good now.  We want to stop feeling the pain of family heartbreaks, of money problems, of health concerns. Of course, we all desire that.  Relying only on an “exciting Christianity,” leaves us immature, focused mostly on whether we feel the way we want to feel. As a result, we don’t wait for heaven, but expect to feel full satisfaction now. But there’s a deeper thirst in the human soul, what C.S. Lewis calls an “inconsolable longing.”  When we get in touch with that desire, we become aware of a deep need within ourselves that nothing in this world can satisfy.  It is then we realize that we were created for another world — one that’s coming soon. 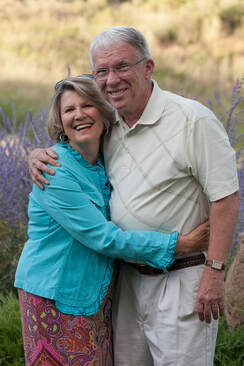 ​​Dr. Larry Crabb has authored over 25 books and is the founder of NewWay Ministries and co-founder of Larger Story. He earned is Ph.D in Clinical Psychology and has been a Distinguished Scholar in Residence at Colorado Christian University for 24 years. He has been married to his middle school sweetheart, Rachael, for over 50 years. They have two amazing sons (Kep & Ken), two beloved daughters-in-law, and five delightful grandchildren. For more information visit www.largerstory.com.
OFFICIAL PRESS RELEASE 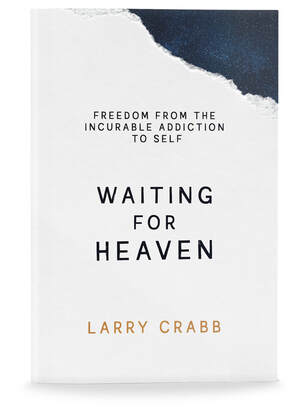 For Immediate Release (Littleton, CO) — According to the American Addiction Centers, drug abuse and addiction cost American society more than $740 billion annually in lost workplace productivity, healthcare expenses, and crime-related costs.  Best-selling author and Clinical Psychologist, Dr. Larry Crabb, believes he has pinpointed the common root of all addictions and describes his discovery in his new book ‘Waiting for Heaven: Freedom from the Incurable Addiction to Self.”

“There is a rarely recognized addiction operating covertly, to at least some degree, in virtually every human being,” says Crabb. “Each one of us has arrived in this world with a stubborn commitment to our own felt well-being. We then live addicted to arranging for satisfaction of whatever longings we can neither deny nor smother. We are a society of self-addicted people, and it has become an epidemic.”

Crabb says self-addiction leads to what he says is a specific sin that causes both Christians and non-Christians alike to turn away from God.

“Our self-protection to keep from hurting, our self-procurement angling to enhance our self-esteem through others, and our self-preservation techniques manifest into Relational Sin,” says Crabb. “This plants the seeds of quarrels, fights and jealousies, causing relational poverty in families, communities, churches, nations and the world. We are failing to love others the way Jesus loved us. When we turn our relational longings towards heaven, we can then learn to fully love God and people.”

Crabb says the predominance of what he calls “Casual Christianity” has led to self-addiction, even among the most faithful of believers.

“As Christians, many of us have given up self-examination that reveals what is ugly in us,” says Crabb. “We live too often with our felt well-being as our priority concern, and because we think Jesus shares that priority, we believe we’re living the Christian life. Casual Christianity has become Counterfeit Christianity, something Paul warned us against in Galatians 1:6.  The absence of waiting for complete satisfaction until heaven begets the presence of addiction, a demand to feel pain-numbing delight in this life.”

Crabb says he knows his hypothesis is not an easy one for most people, even Christians, to swallow, and he admits that while writing “Waiting for Heaven,” he struggled with the concept himself.

“There was an uncomfortable hesitation in me,” says Crabb, “The choice to wait is easy to state but hard to make. Waiting becomes more difficult as we get weary with life’s struggles, disappointments, and setbacks. I don’t believe there is any path to walk that completely eliminates the struggle to resist temptation or that guarantees no further failure. Our addiction is incurable until Heaven, but we can be moving into greater freedom from it as we live in this world. Peter tells us that God has given us everything we need for living a godly life. And I believe a godly life will not be under the control of addictions.”