Q&A with Dr. Cliff Robertson
Author of “Your Life Matters” and founder of The Warrior’s Refuge 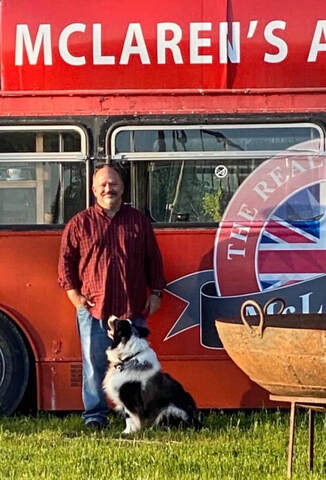 Q: You have been working with veterans for a while now who are suffering with PTSD, depression, and suicidal thoughts, but you mention in the book that you yourself thought about suicide. What led you to that place of despair and what led you out?
A: When I remember that time, my gut still clenches up. I had been arrested and was sitting in County Jail. I had gotten to a point of absolute despair and hopelessness. I had no one to blame but myself and I was drowning in it. I had found out not long before, that my wife had filed for divorce before I was arrested. Which meant that she was leaving me— because of me— and not just the arrest. I was alone and all the people in my life were suffering because of my horrible choices. I felt like I was worth more dead than alive. I remember praying and asking God to take my life – begging Him to. I thought of ways I could do it. In that place of dark despair, God shined His light. A guard brought us personal New Testaments and placed them on our beds. My wife, who was soon to be my ex-wife, sent me a Bible. I had grown up in church and walked the aisle before, but I am not sure that I had ever been serious about it. So, in that moment, I prayed – “Lord, I don’t know if I am saved or not, but I know that I need you more than I need my next breath. I ask that you forgive me and save me….” I can tell you, that while my circumstances did not change in that moment, I began to change. I was truly led out of despair by Christ.

Q: What can our nation do to better care for our veterans who suffer from PTSD and other mental issues?
A: For the most part, our veterans suffer silently. When they are injured, they are taught to assess the damage, embrace the pain, and continue their mission. Since there is sometimes no outward sign of mental anguish, they see no damage to assess. While we can all ignore issues for a period of time, there will always come a day of reckoning. Then comes that breaking point, where they simply can’t continue. Sometimes that day is the veteran finally getting some help. Other times, they become part of the 22 veterans per day that take their own lives. As a nation, we must realize that this isn’t a problem that has just recently come up. We can trace PTSD in some form or another back to the Greco-Persian wars. Warriors are scarred by the battlefield. We must also realize that the Veterans Administration (VA) is overwhelmed and understaffed. And to put the totality of the solution on the shoulders of the VA has set us up for failure. I believe that the answer is found in organizations like The Warriors Refuge, that offers both shelter and counseling. There are other organizations out there doing a great job as well, and as a nation, we need to be supporting those organizations in our states, counties, and cities that are making an impact. Most are underfunded and overworked. I also think that our churches can reach out and have a positive impact as well. What most people are unaware of is that veterans who suffer from PTSD have an even higher rate of suicide. Those veterans who have what is considered a “moral injury” —defined as a traumatic circumstance that people may perpetrate, fail to prevent, or be a witness to events that contradict deeply held moral beliefs and expectations—are particularly vulnerable to suicide and depression.
Q: What has Warrior’s Refuge done to help veterans?
A: The Warriors Refuge is a miracle in motion. It began because I listened to my wife and went to a Disabled American Veterans Christmas Party that I didn’t really want to attend. I sat down next to man who owned a building that he wanted to use for veterans in need. He didn’t know where to begin, nor did he have energy to make it work. Having been a homeless veteran myself, I not only knew what needed to be done, I had experienced it firsthand and had a genuine desire to make it happen. Three years later, we are serving hundreds of veterans each year offering shelter, transitional housing, counseling (Mental Health & Chemical Dependency), assistance with benefits, and vocational training/job placement services. We have brought veterans in from all over the country. We work closely with the VA on a daily basis. We also work with the U.S. Department of Labor and the Department of Health & Human Services. Recently, we added Equine Therapy to our counseling services, and this has had a tremendous impact on our veterans – getting them to open up emotionally in new ways.

Q: Why do you believe any program to treat mental issues needs to have a basis of Christianity?
A: Mental health issues are not new, and there are a number of prominent Christians over the years that have suffered from mental health challenges including C.S. Lewis, Charles Spurgeon, Mother Theresa, and Martin Luther. In fact, according to the National Alliance on Mental Health, 20% of Americans are dealing with some sort of mental health disorder. That means where there are 100 people in a church on any given Sunday, twenty or more are dealing with depression, anxiety, or some other mental health problem. I believe that if we are going to begin with a strong foundation, we have to begin with our Chief Cornerstone – Jesus Christ. Romans 12:2 talks about being transformed by the renewing of our minds. While this can have a broad application, I believe that there is a strong argument for the application of counseling and mental health therapies. The real hope for the future is not found in “conforming to the world,” but that doesn’t mean that we throw out traditional counseling theories such as cognitive behavioral therapy. On the contrary, we have seen that when we add traditional counseling approaches to a Christian foundation, we can identify the underlying problems and then the Bible gives us the guidance we need to help them walk out of the darkness into their best lives.