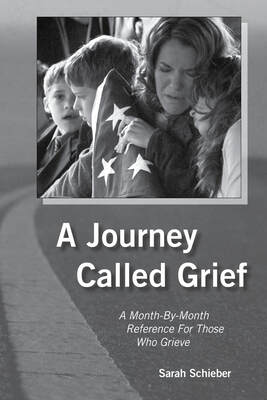 For Immediate Release (Midland, MI) -- Due to deaths during the pandemic, it is estimated that over five million Americans are mourning someone this year and over 43,000 children have lost a parent. With the release of her new book, “A Journey Called Grief: A Month-by-Month Reference for those who Grieve,” Sarah Schieber hopes her personal story will become a resource she never had when she became a widow and single mother of three children, ages 11, 9, and 6.

Sarah’s husband, police officer Chad Schieber, died while running the Chicago Marathon in 2007. He was only 35 years old with no known health issues. The book offers raw journal entries during the months and years that followed, including Sarah’s struggle with her faith.

“I was still weeping eight months after Chad died and I often thought I was losing my mind,” says Schieber. “I wanted to know if I was normal, but I couldn’t find someone else’s journey to validate my own. I eventually realized that my journals were a treasure for other hurting people and that I had written the exact thing I had sought after during my time of need. I was a strong woman of God the day Chad died, yet I struggled so very much in my faith in the days after his passing. This book accounts the real, raw, totally transparent version of what wrestling with God looks like.”

Schieber is also very honest about her abusive second marriage a couple of years after Chad’s death which sent her into another season of questioning God.

“I married a man about two years after Chad passed away and came home from our honeymoon with bruises on my body,” says Schieber. “Fourteen months later he broke one of my fingers and I had him arrested. That entire journey is also in the book with a warning to widows. Be careful. I went on to be alone for a good long time after that divorce. About five years later, when I wasn’t looking for it and really didn’t want it, a wonderful man came into my life. Bryan and I are about to celebrate our seventh anniversary. So, for any widow wondering, love is out there. Heal your heart first, then let it come to you. Don’t chase after it. Fall totally and completely in love with Jesus in the meantime. That is the best medicine for a lonely heart. And please remember – NO man completes you and NO MAN gets to tell you who you are or who you are not. Your identity is found in Christ.”

Schieber says she hopes “A Journey Called Grief” will help not just people who are grieving, but those around them who are trying to be supportive.

“I had verse-toting believers lining up at my door trying to tell me to put a happy verse on my pain and get over it,” says Schieber. “Grief is a process. A long one. As a body of believers, we need to get better at climbing down into other people’s pain and sitting in it with them. Stop trying to pull people out of their pain—instead, walk through it with them. That is what God does. He walked WITH me through my pain.”
​
Schieber says all her wrestling with her faith taught her some valuable lessons about God’s faithfulness.
“God’s faithfulness has nothing to do with us or the circumstances of our lives and everything to do with Him,” says Schieber. “The word ‘faithfulness’ translated from the Hebrew means ‘steadiness.’ Somehow, we have made God’s faithfulness about us — ‘the biopsy came back negative, God is faithful.’ No, that is not how it works. My husband dropped dead; God is faithful. I believe when we can make a statement like that, we understand the heart of God.”
Click here for a Q&A with Sarah Schieber